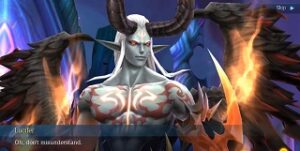 Elune is a brand new turn-based strategy game for mobile by Gamevil. The CBT of Elune game is now out for Android, downloadable from Google Play Store

In 2015, Gamevil terminated its one of the best games named Elune Saga. Now, it’s back. But with the new game’s mechanics, characters, battle system, and breathtaking graphics. The first CBT was released in May month this year. But it was in the Korean language. This time, it’s available in English on Google Play Store. Here’s everything you need to know about the Latest Elune game.

The CBT has started yesterday(15th October) and will end on 23rd October 2018. All the progress will be deleted after the due time.  Now, let’s learn more about the game.

Elune game features a number of game modes; PvP, adventure, challenge, events, and more. The player starts the game from adventure mode and completes the acts(story mode). In each act or stage, you will fight against different enemies.

Upon victory, you will get gold, weapons, items, Elune, and much more. Additionally, as you play in the adventure mode, you and Elune(in the team) will gain EXP(Required to level up). As your level increases, new game modes and features will get unlocked.

The game features over 190 Elune and all the Elune have different skills. These Elune are classified into seven different classes. Your objective is to make them strong by increasing their level, skill level, or abilities. Build a strong team for the PvP mode and strike down the players from all over the world.

Like other gacha games, In this game too, you will collect the shards to summon Elune. The game’s graphics are amazing and the battle system is also good(it also features energy system though). If you want to try it now before the official public release, then you have the chance. Download Elune by Gamevil for Android – Here(Google Play Store).