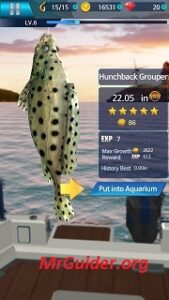 Well, it’s gameplay is similar to other games, but, most of the good fishing games are online. But you can play it offline(except first time launch). It starts with a decent tutorial in which you guided through the basic of the game; how to play, about strikes, tension gauge, skills, selling, and much more.

All you need to do is tap the Go icon on the main screen and it will take you to the world map. At world map, you can select an unlocked location and start the fishing. At every location, you can collect dozens of fish species. Can you collect the boss fish?

Your objective is to complete the collection and unlock all the locations.

With default rod, reel, it would be hard to catch the legendary SSS rank fish. You can upgrade the rod or get a new rod from the chest. You can watch a video ad and open the chest; you could get the rod, lure, reel, and many more items.

Later, you can enhance, evolve the equipment and increase the chances of getting a large fish. To attract a large fish or a specific fish, you can change the lure.

After catching the fish, you can put it in the aquarium. Later, once the fish reaches the maximum level, sell it for coins. You can reduce the growth time by feeding and reach the maximum level fast.

The SSS or large or 5 star or legendary fish gives diamond as a reward while with normal fish, you get coins.

You have two more options after you catch a fish in Fishing Championship game; craft or sell. By crafting, you could get a 5* lure. And you can also sell directly for coins and XP.

Well, it does not feature too many features like Fishing Strike game, but if you are looking for an offline fishing game, then it would be a great choice. Its graphics are awesome, it features lots of fish, locations, offline mode, many more features.