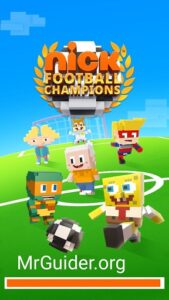 Starting today, we will cover all the stories related to new Android games. And here’s the first one. Nickelodeon has just released a new football game for Android devices, featuring your favorite characters; SpongeBob, Luna, and many more(the list is below). Nick Football Champions game comes with a simple arcade gameplay. You just tap the screen, swipe, sprint, and goal. However, a good strategy is required to beat the rivals. Let’s dive into the game’s wiki!

Nick Football Champions game starts with a tutorial in which you learn about the basic of the game. Your objective in this game is to beat the rivals, collect the trophies, and unlock all the characters.

You can play your turn manually, but you can not defend manually. It’s automatic. You just tap the button named tap to defend and there are two possible outcomes; missed or goal.

Then tap the continue button and if you get the chance, you will be able to play the game manually.

Opponent team’s member will try to steal the ball, you have to play the game wisely. Swipe left or right to dodge their tackle attacks. After you pass all the players, you will be able to strike.

And at that time, you have to stop the pointer in the right direction, then tap the screen to kick the ball; you can also adjust the power of the kick.

Score as much as you can to win the match. After a match, you will get keys. Use keys to unlock all the characters.

The new stadiums get unlocked when you unlock the players. It does not include ads, it’s in-app purchase. You can also unlock all the characters by paying real money, it costs you $4-5(varies).

In the end, I would say, it’s a great game to pass some time. The gameplay is addictive, challenging, and awesome. The graphics of the game are also excellent. And you can play it offline. Download Nick Football Champions game – here(Google Play Store). Also, see – Best football games for Android