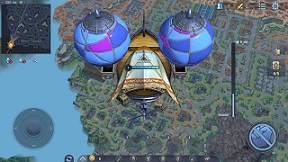 Snail Games USA has just announced the Survival Heroes release date for Android and iOS. It’s coming this 30th, but not worldwide!

Survival Heroes is a MOBA Battle-Royale game for Android and iOS by Snail Games USA and the first game in this genre. The game combines the MOBA combat gameplay with battle-royale mechanics. We played the closed beta and can confirm that this would be a great hit. And it’s coming to SEA countries this 30th(30-08-2018) on Google Play Store and App Store. The Survival Heroes release date has been announced today in a Facebook post, from the official page.

The closed beta test ended in the first week of August. And within a short span of time, the public version will be out for Android and iOS. Let’s go deep into the game’s genre: –

The survival heroes game follows the battle royale genre mechanics; to win the battle, you have to be the last one standing. A group of heroes will land on a magical land, having nothing in hand. After landing, you will search items(there are a number of weapons; bow, pan, sword, and more. You can unlock more by spending in-game currency).

There are a number of areas to loot the resources; go inside the house, open the chest, pick the best weapons.

Like other battle-royale games, In Survival Heroes game too, the safe zone area in Magical Land shrinks after every few minutes. To not to take damage, make sure to move on in the safe zone as soon as possible.

There are no snipers or rifles! If you have ever played MOBA games, then you can imagine the combat system of Survival Heroes. Use the bow, sword, pan, or more weapons to attack the enemies. Unleash the skills to deal massive damage, power-up by activating the buffs, use potions to heal, and defeat the enemy. You can hide inside the grass.

There is a feature called scout. Using it, you can trace the enemies. All you need to do is deploy the scout device and it will do the job for you.

You also earn gold by destroying the items, opening the chests, killing the creatures, and there are many more sources. Later, when you interact with a trader, you can exchange the in-game items/currency for better skills and boosters.

The graphics are amazing and everything is well-polished. You will definitely love it. Also, see – Top new Android games of August 2018

Download – Here(Google Play Store). For iOS – Here(App Store). Also, see – Best battle royale games for Android. You can download the APK from APKPure. You may encounter the error in Google Play Store if the game is not available in your country(It’ll out for SEA countries, the worldwide release is not yet announced).