Afallen is one of the UR-grade characters in the Revived Witch game. Read on for Revived Witch Afallen; get to know her strengths, skill details, and more. 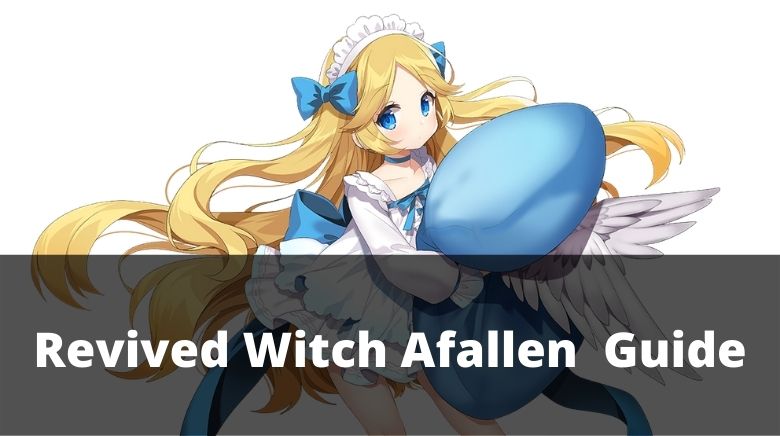 Afallen is known for her supportive abilities that help the whole team during the battle. Thanks to the skill kit, Afallen can absorb the DMG dealt to allies by generating a shield. And, she can inflict AoE DMG, reduce the enemies’ DEF, and dispels the buffs.

Revived Witch Afallen has three skills; Barrier, Holy Radiance, and Light of the Sanctuary. In this part, we are going to explain all these skills;

With this skill, Afallen creates a shield that helps her protect allies as she absorbs the DMG dealt to them. While the shield is active, PHY DEF and MAGIC DEF stats are increased and she gets immune to all the DMG for initial 2 seconds.

With this skill, Afallen inflicts magic DMG on the enemies, removes the buffs that they have, and decreases the magic DEF.

Light of the Sanctuary Skill⇓

Passive helps you unleash Holy Radiance skill as a bonus.

So that covers the Revived Witch Afallen Guide Wiki.

Backstory 1
As the Defender of Holiness, she has inherited the purest bloodline of the Sanctuary, succeeding her older brother Garditis as the gatekeeper.

Young as she is, she has been given the important task of expelling those outsiders who try to invade the Sanctuary.

However, she has no sense of responsibility at all. She prefers playing with flowers and small animals to doing the tedious work.

Therefore, she often leaves her post and sometimes even goes to the Lower Domain.

Backstory 2
Carrying a pillow around, she often lies down on the grass when tired of playing and quickly falls to sleep.

Even so, no one dares to approach her because anyone disturbing her slumber will be identified as an intruder and be hit straight at with the pillow.

Only her brother Garditis and sister Parfait can wake up her without being hit.

Backstory 3
She looks harmless, but in the eyes of the invaders, she is the unbreakable wall of the Sanctuary.

Any magic attacks will be instantly absorbed by her pillow, leaving her completely unharmed.

After that, to others’ surprise, this lovely girl, will just pat her beloved pillow, and continue to enjoy an afternoon of peaceful sleep.

Backstory 4
She likes eating lemon pie, which is sour but unexpectedly gaining popularity among the nobles while her sister Parfait fond of sweet taste hates this pie so much.

Due to the division of opinion, they fight a lot.

Afallen decides to offer the lemon pie to the Protector and takes this opportunity to determine the orthodox status of lemon pie in the Sanctuary.