Anemone is one of the UR-grade characters in the Revived Witch game. Read on for Revived Witch Anemone; get to know her strengths, skill details, and more. 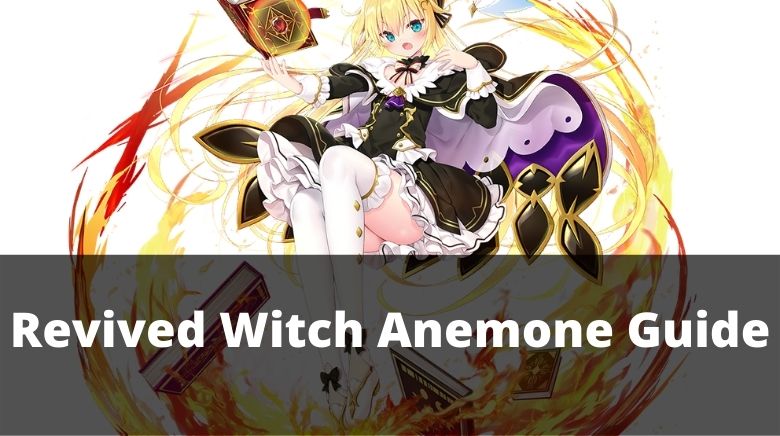 Anemone is known for her magic skill kit, thanks to that, Anemone can inflict AoE DMG on all the enemies and also inflict a burn effect on them. Below we have explained all the skill info in detail.

Revived Witch Anemone has three skills; Great Fire, Soul Flame, and Divine Tsundere. In this part, we are going to explain all these skills;

With this skill, Anemone inflicts magic DMG to all the enemies and applies a stack of burn status.

With this skill, Anemone inflicts magic DMG on all the foes. The target receives more DMG when marked with burn effect.

So that covers the Revived Witch Anemone Guide Wiki.

Backstory 1
The girl who entered the Chrono Tower with the preacher. She claims to be a champion of justice who repels monsters and evil forces.

She can switch between the magic of different elements, but her personality may change as well.

She looks cute and beautiful but once she starts talking, she often annoys others by making some sensational statements, especially with a superior attitude.

Backstory 2
She was an ordinary girl from the north but one day she was possessed by the metempsychosis of a priest and endowed with the power of nature that allowed her to cast all kinds of elemental spells.

Yet this immense power made her ostracized and feared by others.

All those negative emotions had far exceeded what a maiden of her age could bear.

As more fears crept in, she decided to leave her homeland, away from those who hurt her before.

Backstory 3
After leaving the homeland, Anemone attracted the attention of the Church due to her immense power.

The Church provided a shelter for her and tried to cultivate her into a tool that cleansed the heretics and taboos.

However, her personality didn’t make her a perfect match for this kind of dull and cruel work.

In order to force her into that, the Church awakened her fire elemental power inside, which changed her personality by suppressing her weakness and gave rise to a power that far exceeded her magic.

After the awakening, Anemone turned into a whole new person who aggressively performed the order of the Church without any thinking.

Backstory 4
Having heard people were heading to the Tower in search of the Dark Magic, the Church sent Anemone to cleanse those greedy ones.

Yet her immense power was also a potential risk for the Church so the Preacher Fellagood was appointed to go with her into the Tower and keep a close watch on her along the way.

Anemone never holds back her dislike to anything she finds annoying
so she always has a fight with Dejase who is too reticent for her to get along with.

Yet the fight itself is harmless, nothing more than thoughtless bickering. Anemone has strong self-esteem.

Once hurt, she will vent her feelings waywardly, which is a major headache for Fellagood.