Caledonia is one of the UR-grade characters in the Revived Witch game. Read on for Revived Witch Caledonia; get to know her strengths, skill details, and more. 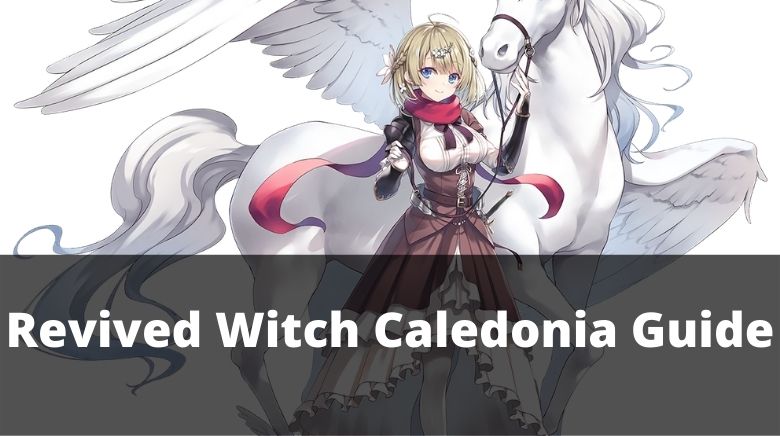 Caledonia is known for her healing skills and the ability to knock off enemies and reduce their PHY DEF. Below we have explained all the skill details!

Revived Witch Caledonia has three skills; Plume of Guard, Overwhelming, and Sacred Beast: Strengthen. In this part, we are going to explain all these skills;

Using this skill, Caledonia restores the health of all allies and decreases the amount of DMG that they receive.

With the help of this skill, Caledonia charges forward knocks of all the non-friendly units in the path, then goes back to the original position, immune to all DMG and harmful debuff effects along the way. Each non-friendly unit is knocked off for X seconds and receives PHY DMG. Within X10 seconds, the enemies’ PHY DEF is reduced.

So that covers the Revived Witch Caledonia Guide Wiki.

Backstory 1
A maiden who does not want to reveal her birth, she is said to be a noble princess from southern Elf Lakeside.

There is also some speculation that she has elven blood flowing through her veins, which she herself denies.

Gifted with the special ability to communicate with animals, she has been fond of seeking various animals in the Forest of Elves since her childhood.

It’s in the Forest that she met the Sacred Beast and the legend says that only a pure-hearted person can obtain the approval of that beast.

Backstory 2
She shares the same reverence for nature as the inhabitants of the Forest, and the Holy Mother she believes in is said to be Dana, the guard of the Forest.

She is unaccustomed to greeting strangers, allegedly because she grew up in the palace, and she did not communicate much with others except for the maidservants and nobles around her.

Her only friend is Flora from the Forest of Elves. The two of them often stroll by the lake, suggesting a close bonding.

Backstory 3
The Sacred Beast from the Forest of Elves was the ride of Dana, the Goddess of Lake. He was too proud to get close to humans, let alone be manipulated by humans.

However, the Sacred Beast before Caledonia is totally different. He seems very close to the human Caledonia and even allows her to touch his unicorn, a symbol of his nobility.

Under the full moon, Caledonia likes to stroke the plush fur of the Sacred Beast by the lake and snuggle up quietly up to him.

Sometimes she will clean his fur, carefully comb him, and patiently dry any remaining dampness.

Backstory 4
Caledonia used to be not mindful of her appearance

but since she was seen in gorgeous garments and complimented by Flora, she has started to pay heed to her dressing and even tries on the noble garments she rejected before.

The Sacred Beast has noticed her changes and disapproves.

Each time Caledonia is dressed up in finery, the Beast will shake his body by fits, trying to toss off Caledonia to show his discontent.