Redeem Da Hood Codes 2023. An updated Da Hood Wiki for codes featuring all the new and working codes that are not expired. 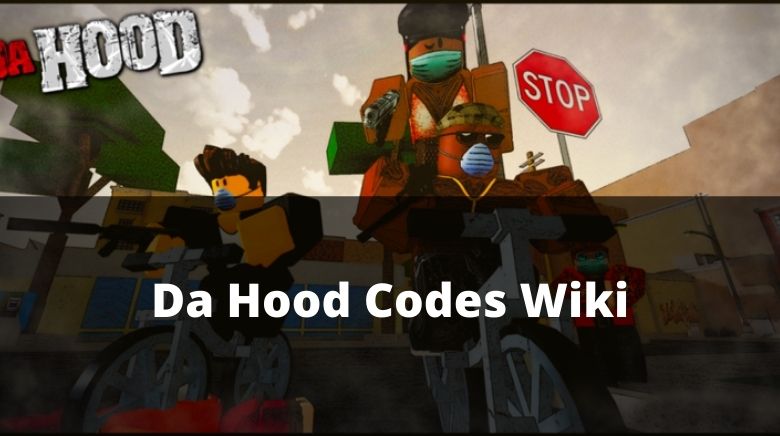 Published by Da Hood Entertainment, Da Hood is one of the popular games and among the ones who have got a billion visits and over a half-million likes. The game has been around since 2019, but the codes started to come out in 2022.

Speaking of gameplay, In Roblox Da Hood, players will build their character or get stronger by performing various activities such as hitting the weights, completing quests, etc. Also, players can earn in-game cash by robbing the banks, shops, or if you don’t want to do these criminal activities, you can play as a cop and focus on catching the bad guys.

In this post, we will be covering the codes. Make sure to bookmark this page and check out our Roblox Game Codes Library for more codes.

We re-checked for new Da Hood codes on February 2nd, 2023. As soon as a new code comes up, we will add it to the below code list.

The following Da Hood Codes Wiki showcases an updated list of all new codes that players can redeem or exchange in this Roblox game for freebies such as cash, skins, boosts, items, etc. So let’s not waste any time and check out the Da Hood Codes Wiki: –

Da Hood Codes are time-limited; these gift codes expire after a few days, so you should redeem them as soon as possible and claim the rewards to progress further in the game. We keep an eye on the new Da Hood Codes for this game title, so we recommend you to visit this page regularly.

To avoid any Da Hood Codes error, please make sure that you enter the redeem code in the game as we have displayed in the list we have listed above, including the unique characters and letter case (capital & small letters).

As mentioned above, Da Hood Codes will work for only a specific period. Below, we have shared all the coupon codes, including the expired ones; you can try redeeming these expired Da Hood Codes and see if they work for you: –

How To Redeem Codes In Da Hood?

How To Get More Codes For Da Hood?

More new Da Hood Codes are published on the game’s official social media handles like Facebook, Instagram, Twitter, Reddit, and the game’s official Discord. Usually, the game developers publish the gift codes on special events like the game’s milestones, popular occassions, collaborations, and special events. Once available, we will update this gift code list with all the new redemption codes. You can bookmark this page and keep regularly checking for Da Hood Codes.

What Are These DA Hood Codes?

DA Hood codes, gift codes, or coupon codes are unique codes developers share with players on their official social media handles, mostly on Facebook, Twitter, Reddit, Discord, Instagram, or YouTube channel. Or, sometimes, they share the codes on the game’s very own forum website. These DA Hood codes are different from the cheat codes. These DA Hood codes usually reward in-game currencies or items. Usually, the basic currency(the currency that you can farm by playing the game) or premium in-game currencies(hard to obtain by playing the game) are rewarded with the codes.

How Many Times Can You Use A DA Hood Code?

Are These DA Hood Codes Permanent?

Some DA Hood codes are permanent, while some last for a few days or are limited to a certain number of usage. A permanent code, a code that’s not time-sensitive, can be redeemed once by a player, anytime. Time-sensitive or time-limited DA Hood codes are limited – the date is set by the developers. Once the time limit has been reached, you will not be able to redeem these codes.

Is There Any Requirement To Redeem DA Hood Codes?

There is no prior requirement to redeem the DA Hood codes; as long as it’s active, you can redeem the codes.

So that’s all we got in this post on Da Hood Codes Wiki. We will continue to provide updates on new codes. If you know more codes other than the ones we have shared above, please do us a favor by sharing in the comment box below. We will add the code to the list and give you credit. Thanks for visiting us; you have a good day ahead!