Read on for the Disney Mirrorverse Ian Lightfoot guide covering his stats, abilities, and talents and find out whether he is good. 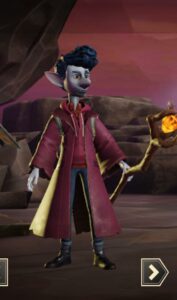 How To Get Ian Lightfoot In Disney Mirrorverse?

In Disney Mirrorverse, you can obtain Ian Lightfoot by opening the crystals; Stellar Crystal, Famed Crystal, and Timekeeper Crystal.

Ian Lightfoot is a support role character in the Mirrorverse game and he is a decent one. For the early game or at specific stages in the late game, Ian Lightfoot can help you out but don’t expect extraordinary performance from him in all the game modes. Please refer to our Disney Mirrorverse tier list guide for his tier rankings.

When the Strength Charge is active, Ian Lightfoot’s special ability inflicts his target with a -20% defense debuff for x10 seconds, max stacks; x3.

When the Fortitude Charge is active, Ian Lightfoot’s special ability inflicts his target with a -10% attack debuff for x10 seconds, max stacks; x3.

Unlocks at level 12. Grants +20% Defense at the start of an encounter.

The strength of effects from Ian Lightfoot’s charges are 50% stronger. Unlocks at level 25.

An elf teenager with awkwardness to spare, Ian is very straight-laced and by-the-book. And it’s a specific book – the magical quests of Yore – that he’s memorized and fully absorbed, so he can unleash its awesome spells and spell D-E-F-E-A-T for the fractured.

So that’s all we got in this post on the Disney Mirrorverse Ian Lightfoot guide.