Rush Royale game is now officially packed with “Heroes”. Read on for the Rush Royale Heroes Guide: how to get heroes, use them, morales, and more! 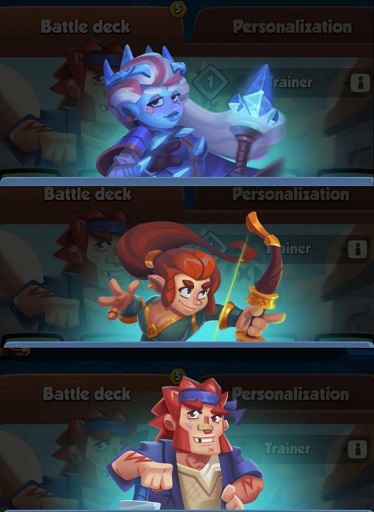 Before you initiate the PvP and Co-Op mode, you can select a hero in the deck. Only one hero can be selected. Each hero has a unique set of skills that can help you during the battle or put enemies into trouble. To unlock all the abilities of a hero, you will need to level it up. To level up a hero, you will need its duplicate fragments.

As of writing this, Rush Royale features X3 Heroes; Trainer, Jay, and Snowflake. By default, Trainer hero is unlocked. Jay is also unlocked but you will need its shards to complete summon. Arena 7 unlocks Snowflake.

Trainer’s main active skill is called companion. Activating summons a dummy to field blocking monster movement for a while. It costs X1K Morale. Let’s take a look at its other skills: –

Trainer level 5 unlocks the “Combat Training” skill – it increases the ATK SPD of the units while the “dummy” is on the combat field.

Level 10 unlocks the “Team Boost” skill – it increases the damage dealt by the units on the combat field.

And, level 15 of Trainer unlocks the “Explosive Surprise” skill – when the active skill’s effect ends, the dummy will explode and cause Area DMG.

Jay’s main active skill is called “Rain of Arrows”. Activating it summons a rain of arrows in a small area when the hero skill is cast. The arrows can cause CRIT DMG. It costs X600 Morale to activate this skill.

Sherwood Hunters – Thanks to this skill, each archer in the deck will help you generate extra morale.

Level 10 of Jay unlocks the “Marksmanship” skill – it increases the CRIT DMG chance of Rain of Arrows.

Snowflake’s main active skill is called “Winter’s Kills” – it temporarily freezes the foes and causes DMG to them.

Cold Welcome – thanks to this skill of Snowflake hero, when an opponents’ unit appears or merges, they might freeze. In the Co-Op mode, it temporarily receives the skill to slow down the foes.

Snowflake level 5 unlocks the “Best Served Cold” skill – it has the chance to slow down monsters after receiving an activated negative effect.

How To Get Rush Royale Heroes?

You can unlock Rush Royale Heroes by reaching a certain arena rank, if you have already unlocked heroes, then you can get its shards from the shop. The daily shop also features hero shards deals or you can open the hero chests in the shop to get hero shards. Navigate to the store menu and under the chest section, you will see the “hero chest” that costs X240 gems. Although, the daily deals feature shards that you can buy with coins. If you are low on coins, you should keep an eye on the promo codes as they grant free coins. 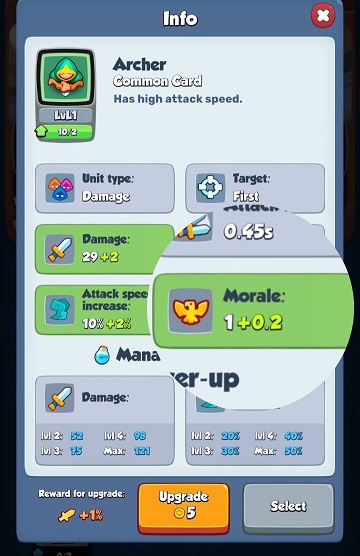 To activate the main skill of the Rush Royale Heroes, you will need X morale. During the battle, morale is generated by the units. Each unit has a different morale stat that you must check and then build the deck. Navigate to the card tab of the screen, tap on a unit card, and then tap on the info button -> check the morale stats.

You can upgrade the units to speed up the morale generation.

So this would be all in this post on Rush Royale Heroes Guide for beginners.