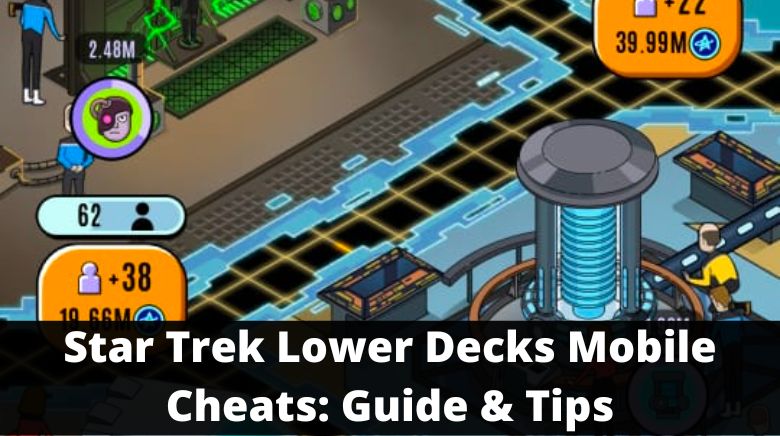 East Side Games Studio is well-known for publishing idle games based on popular shows such as It’s Always Sunny, Archer, and The Office. Recently the studio released another mobile idle game based on the popular sci-fi show Star Trek Lower Decks. In all their games, you progress through a storyline classified into episodes. Each episode will have a certain number of goals to complete.

As you progress through these episode quests, you will unlock new characters, storylines, upgrades, events, and other content. Star Trek Lower Decks follows the same motif. As a player, you will build the simulations that yield merit points(in-game currency) over time. Invest the merit points to hire holo-crews that increase the simulations’ merit point yield. At the same time, do the episode quests to earn crates that contain character cards, dilithium, platinum, and simulation chips.

The following Star Trek Lower Decks Mobile cheats, guides, and tips are for beginners to understand all the core aspects of the game.

Out of these 11 simulations, Shuttle Bay yields the lowest MP, while Q’s Courtroom yields the most.

As you progress through the episode quests, new simulations will get unlocked.

Spend the MP/Merit Points to hire holo-crews on simulation. The more holo crews you hire, the more merit points that simulation will produce. Simulations that yield more MP are your target; you should try to unlock them as soon as possible. Invest heavily in the starting ones early but gradually shift the priority to subsequent ones because starting simulations have low MP yield.

Hiring holo-crews can grant chips and Dilithium; you get these rewards at milestone recruitment levels, i.e., upon hiring the first 25 holo-crews, then 50, 100, 200, and so on.

Simulation upgrades are permanent, unlike the holo-crew investments, which you lose after episode completion. You will need dilithium and simulation chips for the same you want to upgrade. For instance, you will need Shuttle Bay chips and Dilithium to upgrade the Shuttle Bay simulation.

Dilithium: You can obtain it by watching the video ads, trading character cards, making milestone holo-crew recruitments from the crates, and in exchange for latinum in the shop.

Characters can automate the MP collection; each simulation requires a certain character for the automation. Characters also boost the MP yield.

New characters are unlocked as you progress through the episodes. To upgrade the characters, you will need their dupes or cards or the chips + Dilithium. You can obtain their dupes/cards/chips by opening the crates(complete the episode quests to get crates, free time crate in the shop, or buy with latinum), by spending Dilithium in the shop(chip section), or by reaching the holo-crew recruitment milestones; i.e., 25, 50, 100, 200, and so on.

Upgrading characters will increase the mini-game power, i.e., tap power. When you end the episode, you have to tap as many times as you want; the bar at the top of the screen shows your progress. Based on the number of times you fill it up, you get the crates.

Other Tips: Participate in events for more rewards.

Star Trek Lower Decks Mobile does not have any cheats or cheat code input.

So that’s all got in this post on Star Trek Lower Decks Mobile cheats: guide & tips for beginners.