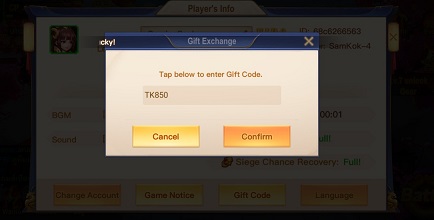 Here’s the list of Dynasty Heroes Legend of Samkok Codes. Scroll down to copy the codes: –

Dynasty Heroes codes are time-limited; these gift codes expire after a few days, so you should redeem them as soon as possible and claim the rewards to progress further the game. We keep an eye on the new valid codes for this game title, so we recommend you to visit this page regularly.

To avoid any gift code error, please make sure that you enter the redemption code in the game as we have displayed in the list we have listed above, including the special characters and letter case (capital & small letters).

As we have mentioned above, the redeem codes will work for only a specific time period. Below, we have shared all the expired codes, you can try redeeming these expired codes and see if they work for you: –

Code Number 9 is “7X2X70“. With this Dynasty Heroes Legend of Samkok Code, you get x100 ingot and x5 10-Year Liquor. You can use the ingot to recruit the warriors or buy items from the shop. 10-year Liquor item can be used to level up the warriors. To redeem the gift codes, you have to tap the warrior avatar in the upper-left corner of the home screen -> “gift code” -> enter the code “7X2X70“. 0 is zero.

Code Number 8 is “801o0S“. (after 1, it’s o-owl). Using this Dynasty Heroes code, players can get x200 ingots, x2 gold chests, and x2 golden keys. From gold chests, you can get the divine tier gears. Use golden keys to open the golden chests.

Code Number 7 is “57952S“. By this Dynasty Heroes Legend of Samkok code, you will get the basic currency; x300 silver, x5 epic golden inkstones, and x300 ingots for free. Redeem this code before it expires.

Code Number 6 is “121R6M“. This Dynasty Heroes code gives you x500 ingots, a talent recruit scroll, and x10 refresh tokens as a gift. Redeem this gift code before it expires.

Code Number 5 is “092M3M5I“. Another Dynasty Heroes: Legend of Samkok code that gifts x100 ingots, x20 EXP items, and 100K Silver for free. Redeem this gift code before it expires. The first thing is the digit 0 in this code.

Go to the home screen of the game. Pay attention to the top-left corner – there you will see the player profile avatar. Tap it. Tap the gift code button and enter the codes listed above. Exchnage the gift codes and get free rewards.

How To Get More Codes?

You can get more codes by following the Dynasty Heroes Legend of Samkok community pages; follow the game’ fan pages on FB, Twitter, the group on Discord, Reddit, etc. and keep an eye on posts by other players or developers or moderators. Or keep checking here for new active codes.

More new Dynasty Heroes Gift Codes are published on the game’s official social media handles like Facebook, Instagram, Twitter, Reddit, and the game’s official Discord. Usually, the developers of the game publish the gift codes on special events like the game’s milestones, popular occassions, collaborations, and special events. We will update this gift code list with all the new redemption codes once available. You can bookmark this page and keep regularly checking for new codes.

So that’s all for now in this Dynasty Heroes: Legend of Samkok gift codes info. If you know any other code, which is not listed here, comment below!