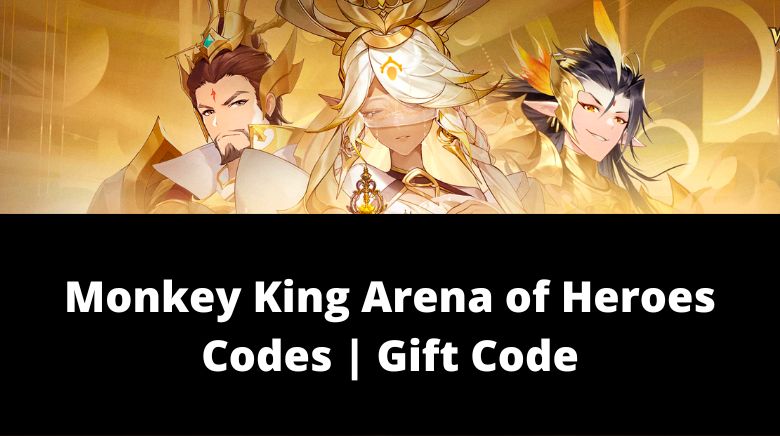 Published by PlayBest Limited, Monkey King Arena of Heroes is a mobile RPG with PvP and PvP game modes. As a player, you assemble a team of heroes to fight the enemies and opponents in PvE and PvP modes respectively.

Monkey King Arena of Heroes Codes do not last forever. They are available to redeem for a limited period, and once that expires, you will no longer be receiving the rewards. If you find any code in the above list not working, please let us know by sharing it in the comment box below.

How Do You Redeem Gift Code In Monkey King Arena of Heroes?

To redeem the Monkey King Arena of Heroes Gift Code, the player first needs to complete the tutorial. Once the tutorial is completed, look for the profile icon button, which should be located in the top-left corner of the game screen. Tap it. Tap the character button. On the next screen, look for the redeem code or gift code button.

Tap on the redeem gift code option; you will get the option of entering and redeeming the gift code. The above Monkey King Arena of Heroes code wiki showcases the complete code list. Enter the valid code and get the rewards. New gift codes are released often; we keep track of all these codes and put them all together in this one updated code wiki list.

How To Get More Monkey King Arena of Heroes Codes?

More new Monkey King Arena of Heroes Codes are published on the game’s official social media handles like Facebook, Instagram, Twitter, Reddit, and the game’s official Discord. You can bookmark this page and regularly check for Monkey King Arena of Heroes gift codes. Once available, we will update this gift code list with all the new redemption codes. Usually, the game developers publish the gift codes for special events like the game’s milestones, popular occassions, collaborations, and special events.

So this would be all in this post on Monkey King Arena of Heroes Codes. Got any new gift codes? Comment below.

Epic Oriental Mythology RPG Monkey King: Arena of Heroes is here! Join Monkey King and Tang Monk on an epic journey from ancient China to the west in search of sacred sutras!
Take part in intense 6v6 RPG card battles, collect hundreds of heroes, and build up your team on the way to the champion of four realms. Don’t miss out on the lifetime free daily 10x draws!

Features
Epic Interpretation of Journey to the West
Unveil the secrets of the four factions: Celestial, Holy, Underworld, and Demon. What is recorded in the fabled sacred sutras? And why must Tang Monk have to overcome 81 perils before he can obtain the sutras? Now, the Oriental Odyssey awaits your exploration and interpretation.

Hundreds of Heroes to Collect
How did Sun Wukong learn the 72 transformations? What’s behind Tang Monk’s 10 reincarnations? What was the tragic past of Lady White Bone? Want to learn more about the origin of all the heroes? Recruit them to your team and find out their secrets for yourself!

Free Hero Switch
Who says training different heroes must be a tedious process? Made a wrong choice earlier and has to start all over? In Monkey King: Arena of Heroes, there is no need to grow a hero from scratch when you change a lineup. Use the quick hero switch feature to transfer exp, equipment, and resources among heroes instantly.

Lifetime Daily Free 10x Draws
Say goodbye to saving up for days just to perform a draw! Monkey King: Arena of Heroes offers free 10x draws every day forever! That’s 3,650 free draws per year! Getting heroes you like has never been easier!

Kick Back and Relax
Want to take a break after battles? Want to spend more time with your heroes? Then try out the fun Homeland feature! Decorate your home and play mini-games to win exciting prizes. In Monkey King: Arena of Heroes, you can always take a break and enjoy your time!

You can find us on the following platforms. We welcome all of your thoughts and suggestions.
Customer Service Email: [email protected]
Facebook: https://www.facebook.com/monkeyking.en