This guide covers “how to play Primitive Brothers”, tips on progression, and other aspects such as getting stronger, a guide to the town, bosses, coupon codes, and much more. So, without further ado, let’s get straight to the main content: Primitive Brothers cheats, guide, tips & tricks: –

Scroll down to copy these Primitive Brothers coupon codes(they are in Korean, so it would be better to copy directly from our site): –

Getting Started With The Basics

(2) Let’s talk about the basic stuff here. Primitive Brothers is a simple idle mobile game where you tap the screen to eliminate the creatures of old times and get stones(stone is the basic currency). You will proceed through the adventure mode which has lots of stages – starting from the strange continent that has over 60 stages.

(3) A stage clears when you defeat the boss. Unlike normal battles, a boss battle would be tough to clear. But you have to clear it if you want to proceed further. Defeat the boss and unlock a new stage. Each next stage would be more difficult and you will have to keep strengthening up the main character. At certain stages, new functions such as slot machine, colleagues, girlfriend, club, rapid battles, etc. get unlocked. Tap the menu button in the top-right -> content -> check the info there.

(4) In the top-left corner, you can see the current power strength; you can make upgrades to the character, equipment, etc. to get stronger and beat the powerful enemies. 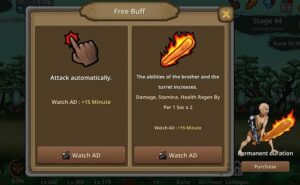 When you are in the grinding phase(needed stones or gears to get powerful and beat the boss), you will have to slay down many many enemies. Tapping the screen in the grinding phase makes everything boring. What you can do is turn on the auto-attack function by watching the video ad and grind the stones. When you get enough stones to make upgrades and reach a certain milestone in the strength aspect, you can challenge the boss and move further. It’s always recommended to use the auto-attack when you are grinding stones.

Getting Stronger In Primitive Brothers

There are several ways to get stronger and boost battle power in Primitive Brothers: –

How To Get Better Gears In Primitive Brothers

Gears are extremely helpful as they can massively boost the battle power. But not all the gears are good; they are available in main tiers; from tier 1 to tier 10 – the higher the tier level, the better the stats they give to the main brother character.

(1) If you keep playing the battles (eliminating the creatures), you will get the gear parts that you can forge in the town and get the gears. The quality of rewards from the battle increases as you clear more stages. So try to focus on clearing the next stage as fast as you can. Accumulate enough strength, use energy, and defeat the boss.

(2) Gear Boxes: Another way to acquire high-tier gear is by opening the gearboxes. These boxes cost gems. The gearbox level determines the quality of the gear that you can get. Every time you open a gear box, the game increases the gear box’s level gauge, and when it fills completely, the level of the gear box increases by 1.

(3) Market: Go to the town -> market -> there you can spend the honor coins for the gear box. You can earn the honor coins in Primitive Brothers by participating in the PvP arena mode.

Collect The Offline Income Every 10 Hours 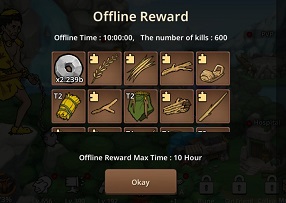 Since Primitive Brothers is an idle game, you will continue to earn the stones and gear parts even if you are not in the game. The game will accumulate these parts and the stones for up to x10 hours. Exceeding this limit, no more rewards will be accumulated. You can collect the offline rewards by tapping the button in the bottom-left corner.

How To Get Free Gems In Primitive Brothers

With gems, you can buy gear boxes, totem boxes, and much more. But gems are hard to get as compared to stones. For free gems, you can watch the video ads(tap the gem icon in the top-right corner), go to event -> claim playtime reward(x85 gems for x120 minutes play), login reward, by completing the daily missions and quests, inviting FB friends, etc.

You can unlock new characters or colleagues by clearing certain stages: –

Research To Advance To Next Civilization

Civilization upgrade allows you to forge high-tier gears in the town. In the upper-left corner, tap the creature icon -> there you will see the research requirements such as reach certain brother level, turret level, and house level. When you meet all these requirements, the game allows you to research and advance to the next civilization.

Check Out All The Primitive Brothers Game Modes

Other than the PvE adventure mode where you slay down the boss and move further, there are many other interesting game modes to play in Primitive Brothers – Tower of Brother is a game mode where you can farm totem boxes, Boss Suppression is the game mode to farm material items, and Rune Scrap Dungeon to farm runes. And, PvP arena to earn honor coins.

Use The Rapid Battle Function

You can earn instant rewards by using this function called Rapid Battle, unlocks at stage 61. Tap the menu button on the top-right corner and tap on the rapid battle.

Tap On The Floating Objects

From time to time, floating stones and chest objects appear on the screen. Tap them and get free rewards.

There are no Primitive Brothers cheats or cheat codes available.

So this would be all in this post on Primitive Brothers cheats, guide, tips, and tricks for beginners. Got more tricks? Share it in the comment box below.