Survival Fort is a brand new MMO game for mobile by RJOY. Read on and check out our Survival Fort guide, tips, cheats & strategies to get powerful

Hey there! Survival Fort is a base-building game for Android, published by RJOY on Google Play Store. The majority of humans have turned into the zombies – due to the virus outbreak – there are some survivors left who build their base in the wasteland and make it more durable. In the game sense, you play as a captain in Survival Fort game and recruit survivors, make them powerful, attack zombies, other players and grow your base. If you have just started playing it, then you are on the right page. Ths Survival Fort guide covers the fundamentals of the game. Also, we have shared a bunch of Survival Fort game tips, cheats & tricks that you may like. So without further ado, let’s head to the main content.

At the upper-left corner of the game, near the captain’s avatar, you can check the current power. The goal is to get more powerful in terms of attack and defense. Your overall power is affected by the captain’s power, heroes’ power, troops, buildings in the base, research, and equipment. So if you want to become stronger, you will need to strengthen your captain, heroes, research in the lab, build/upgrade the base facilities, get equipment, and train more troops. Let’s learn everything in detail and explore all the Survival Fort game tips & tricks: –

Learn About The Residents

You can deploy the residents in the base facility for an additional buff. It could be the reduction of resources required for construction or increase the production of a particular resource. For example – In the bakery, you can place a cook. In Lumberyard, you can assign a Lumberjack, Care Worker in the Hospital, Coach in the Armory, Mechanic in the Vehicle Workshop, Warrior in the Infantry Barracks. 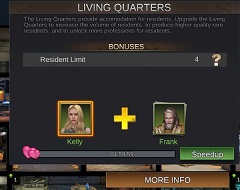 In the Survival Fort game, you can get the residents by sending two residents in the living quarter. You would have two residents at the start of the game; one male and one female. Tap the Living Quarters building(above the Command Center) -> info -> tap the + button to assign one male and one female. Wait until they make out or female resident gets pregnant. She will give birth to a baby – could be of higher-rarity or different professions; cook, warrior, mechanic, etc. are different professions.

You will see a baby symbol and the time left for delivery above the female icon in the living quarters’ slot. By upgrading the Living Quarters in Survival Fort, you can increase the resident limit, produce higher quality rare residents, unlock more professions for residents.

To deploy the resident, tap on building; bakery -> info -> tap the + button -> assign the resident.

Max Out The Production

Resources such as food, wood, oil, steel, steel pipes, coal, energy are extremely useful in Survival Fort game. We would recommend you maxing out all the production centers’ limits (it means to build all the production centers asap) and upgrade them or reach the same level as the command center. This will make sure that you are producing all the resources at the max level. Tap the build button on the bottom-right side -> production -> there you will find all the buildings, which produce the resources. For example – the bakery produces food.

Don’t forget to build all the available production centers and max their levels.

Build The Army Of Troops

Troops improve the overall power – also, you can use them in the PvE and PvP battles + in gathering the resources from the wasteland. So we would recommend you to build all the military buildings in the base asap and max out their levels. Keep training the troops – it costs resources. Head to the build menu -> support -> there you will find military buildings such as a garage – train light vehicle, infantry barracks – train infantry, shooting range – train ranged units, etc. Tap the building once it’s built -> train -> choose the number of troops that you want to train -> tap the train button. After training is completed, claim the troops and start training again.

Learn About The Heroes In Survival Fort

There are over 5 heroes in the Survival Fort game. Head to the hero menu -> on the left side, the game displays all the available heroes. Tap on the hero avatar and check his/her type on the top-right side. Heroes with base-defense attribute should be placed on the fortress gates(the entrance of the base) -> tap it -> base defense -> there you can assign the heroes to improve the base defense. When you hit a certain command center level, other players will be able to invade your base. So it’s important to place the heroes there.

You can obtain the heroes by fighting bosses. Tap the vehicle outside the base -> squad explore -> search -> this will take you to the campaign screen. There you can challenge enemies and loot steel, food, wood, and oil. Also, as you progress through this mode, you get hero shards – these hero shards are used in unlocking new heroes or upgrade the existing ones. On the section screen, on the bottom-left side, you can check the section reward.

And, on the bottom-right side, tap the rewards button to claim search rewards. Tap the challenge button -> defeat the bosses -> get the section clearing reward.

Alliance members can assist each other by sending heroes, helping in rally attacks, speeding up the construction/building upgrades. So make sure to join an active alliance and get the most out of it.

Captain EXP, Resources, designs, material items, and much more can be obtained by killing monsters in the Wasteland. Head to the Wasteland -> use the search function to search monsters -> kill high-level monsters to get better rewards.

Also, you can send the heroes to collect resources from the Wasteland; search -> select the resource that you want to grind -> march.

If you want to attack another player, then tap his/her base -> attack or rally. You must build a strong army before you start the PvP attacks. Increase march capacity, unlock high-level troops, upgrade heroes, and get stronger.

On the upper-right corner, near the event, the game gives you free rewards to collect every few minutes.

On the bottom-left side on the base screen, tap the chapter quest -> complete them for precious rewards. These quests teach you the basics of the game.

Just below this quest icon, tap the main quest icon -> this will take you to the quests screen where you can check the main quests, achievements, growth quests, daily rewards, etc. If you have just started playing it, this is the best thing to do – complete them and earn rewards.

Materials can be obtained by killing monsters in the Wasteland or exchnage for cash.

So this would be all in this post on Survival Fort guide, tips, cheats & strategies for beginners.