The creators of the Redbros game have recently published a brand new mobile game for Android & iOS. It’s available for free to download from Google Play Store and iOS App Store. In this game, your goal is to set up the hero factories so that you can defeat the enemies and their boss. After a certain number of ways in the normal battles, the boss shows up – unlike the normal enemies, you will have to kill him before the due time. If you are unable to do so, you will have to start over and keep doing it until you dispatch him to hell. Without defeating him, you are not gonna progress. If you have just started playing this game, then you are on the right page. This Hero Factory Idle Tycoon guide covers the basics of the game. Also, we have shared a bunch of Hero Factory Idle Tycoon tips, cheats & strategies that you may love. So without any further ado, let’s check out the main content.

There are six tabs in the footer menu. The first one is the world tab where you can see the world map, access quests, ad reward, and the gem mine. In the second tab, you have skills that you can equip/unequip. You get the skills by drawing; you will have to buy the tome to get a new skill or reach a certain milestone; as an example; you get one new skill when you pass the 100th stage. Drawing skills or buying tome book costs diamonds. The next one is the enchant tab. Here you can merge the enchant stones to get an upper-level stone. Then you can place it on the top- slot to enchant the equipment of a particular hero.

You get the enchant stones by leveling up in the Hero Factory Idle Tycoon game or from the boss battles. And, the fourth tab is where you can unlock, upgrade the hero factories. Also, you can watch the battles playing there. Heroes are produced in the hero factory and sent to the battlefield. They will cause damage to the enemy. At the top-center of the battle screen, you can keep an eye on the stage progress; if it’s a boss fight, the boss HP bar would show up. Also, the time gauge that displays the remaining time in which you have to kill him. After the battle tab, you have a training tab. From there you can go on a vocation and earn medals, which can be spent on the permanent upgrades. And, at last, the store tab featuring the deals, equipment chests, gems, time tickets, etc. Let’s learn everything in detail and explore all the Hero Factory Idle Tycoon tips, cheats & tricks: –

Tap The Fairy For Free Gift

Every now and again, a fairy appears on the battle screen. Keep an eye on that screen and whenever she appears, tap her and she will drop a gift pack for you. Sometimes, you can collect it for free. But, sometimes, you will have to watch a short video ad. This gift pack contains random things; it could be boosters, mana-restoration, in-game currencies, etc.

Have The Best Gears Equipped 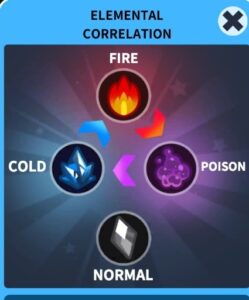 In the Hero Factory Idle Tycoon game, gears are of four elements; fire, cold, poison, and normal. Fire beats poison, poison beats cold and cold beats fire. Similar to this gear element system, bosses also have the same element system. In the boss fight, you can check the element in the left-side of his HP bar. And, for the gear, the element can be checked in the top-left corner of its card. Tap the management button in the hero factory battle screen and go to the helmet or weapon tab. In the top-left of the gear card, you can check the element; normal is grey, fire is red, poison is purple, and cold is blue.

With the elemental system, you can deal more damage to the boss. For example; if the boss’s element is cold. Equip the poison type gears because poison beats cold. But, if you equip the fire weapons, you will suffer more damage because cold beats fire.

Upgrade Wisely In The Hero Factory

In the battle tab of the Hero Factory Idle Tycoon game, you can upgrade the factories and manage the factories. In each factory, you produce a specific hero. For example – Swashbuckler hero factory produces Swashbucker heroes. In Hunting Queen, you produce Hunting Queen. Every new factory you unlock will have a better hero than the old factories. For example – Witch> Blade Master > Hunting Queen > Swashbuckler. (Bottom ones are high – so prioritize the upgrades of bottom factories first and then go up one-by-one).

If you tap the management button, you can check the combat power. Compare it with other hero factories and you will see the difference in their combat power at the same level; the bottom ones would be producing best or powerful heroes than the top-ones that you unlock early in the game.

In other words, don’t stick to a hero factory – always try to unlock the next one because it will give you a better hero than you already have. Upgrade the bottom-rank factories first so that you can produce more of that type of hero to increase DPS and slay down the big bosses.

Buy Gears Carefully For The Heroes

Each hero in the hero factory uses a unqiue weapon. For example; the hunter queen uses a bow weapon. Blade Master uses blades. If you tap the management button, you will see the three tabs; wardrobe, helmet, and weapon. You can equip helmet, new outfits, and a weapon to the hero. The higher its quality, the stronger a hero gets.

But, you need gems to buy this stuff. Since you have limited gems, you would not want to buy gears for a poor hero. We would recommend you investing in the high-powerful heroes that unlock in the bottom-rank factories. Every new factory unlocks a better hero; Witch > Blade Master > Hunting Queen > Swashbuckler. Save your gems for the late game.

You can get the gears from the store; the daily deals featured specific gears, buy the chest for a random gear.

To enhance gear, you need duplicate copies or cards, which you can obtain from the chests or daily deals. Also, you will need the weapon coins or helmet coins. Don’t enhance any random gear; save your weapon coins, helmet coins and spend only on the best gears; high-star level. Additionally, avoid the heroes produced in factories that you unlock in the early game. For example – Swashbuckler, Hunting Queen. These early heroes don’t do significant damage as compared to the heroes that you unlock later in the game. Save the weapon coins for the late game.

Enhancing and Enchanting are two different things. In enhancing, you raise the star level of gear and get stat buff or elemental buff.

For enchanting, you will need the enchant stones that you acquire by leveling up in the game, from the store or boss battles or other sources. The higher the level of enchanting stone, the more boost a hero gets. Head to the enchant tab, select the enchant stone and drag it to the main slot. After that, select a hero that you want to power-up by enchanting the gears. Random gears will be enchanted. This one is the cheap and easy way to get stronger in the Hero Factory Idle Tycoon game.

Leveling Up – as you slay down the heroes, you will gain EXP and eventually level up in the hero factory idle tycoon. In the upper-left corner, you can check the level progress.

Go On A Vacation In Hero Factory

It’s the prestige function in this game which gives you medals that you can use for the permanent upgrades. It unlocks after clearing the 50th stage. Head to the training tab and go on a vacation. It resets the progress; you will gain medals, things like equipment, skills would not reset. (You would not lose the helmet coins, weapon coins).

Ad Boosters in the game help you progress fast. There would be two turbo boosters options on the left/right side of the screen.

Use The Skills At The Right Time

In the boss fights. Don’t use unless required. These skills required mana, which recovers slowly.