Read on for the Disney Mirrorverse Tiana guide covering her stats, abilities, and talents and find out whether she is good or not. 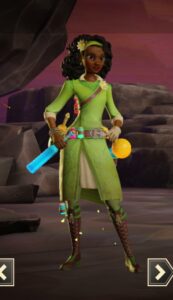 How To Get Tiana In Disney Mirrorverse?

In Disney Mirrorverse, you can obtain Tiana by opening the crystals; Stellar Crystal, Famed Crystal, and Timekeeper Crystal.

Yes, she is a good support character who can be paired with Ariel/Baymax/Mulan/Sulley.  Please refer to our Disney Mirrorverse tier list guide for her tier rankings.

Launching Tiana’s heavy attack has a 50% chance to gain a cleanse buff, automatically removing itself to cleanse the next damaging debuff or stun that activates.

Each time Tiana or an ally cleanses any debuff, Tiana

Titan throws a potion at her ally, with the lowest HP percentage, inflicting 100% damage and knocking back enemies in a small area around the target.

Titan’s heavy attack has a 25% chance to inflict a burn inflicting 25% damage per second for x4 seconds.

Enemies hit with Tiana’s special ability have a 50% chance to be inflicted with a burn inflicting 75% damage per second for x4 seconds.

Unlocks at level 12. Grants +20% health at the start of an encounter.

Unlocks at level 15. Grants +20% attack at the start of an encounter.

Unlocks at level 20. Tiana heals all allies within range of her special ability an additional 4% HP per second for x3 seconds.

Each cleanse buff on Tiana also grants her 20% critical damage.

Each time Tiana or her allies would gain a cleanse buff from Tiana’s special ability but can not due to the max stacks, for each excess cleanse buff Tiana instead grants all allies a 10% attack buff for x10 seconds.

Tiana is an alchemist with astounding culinary prowess, able to create powerful potions with incredible magical effects. Starlit fireflies are attracted to her concoctions, and her communication with them further enhances this improvisational dreamer’s skills and abilities/

So that’s all we got in this post on the Disney Mirrorverse Tiana guide.