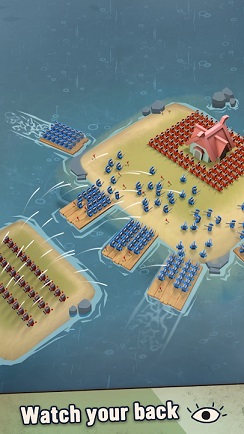 In this Island War: Raid guide, you will learn how to play the Island War: Raid game, about the best troops, the troop tier list, heroes, building the formation, base, and much more. So, let’s not waste any time and get to the main content: Island War game guide, tips & tricks: –

Get Started With The Island War Raid Game Basics⇓

(1) PvP: Island War is mainly a PvP raid game where players build the base, raid, and loot the resources. In the top-left corner of the game screen, tap the menu button -> battle log -> the battle log shows the list of players who have raided your base and the results; win or defeat – so if you see your resources/wood, trophies, and coins lower, it could be because your base was raided by other players. On the same battle log screen, you will see the revenge option that allows you to revenge the intruder.

(2) PvE: There are some PvE events in the game like Legion Conquerer that you get to play every day for a certain number of times. The PvE events also offer quality rewards such as gems, gold, and wood.

(3) Battle: To get the victories, you must destroy the city hall on the enemy base. And it would not be easy; enemy territories would be guarded by the troops. If they wipe your whole army out before you destroy the city hall, you will get defeated and lose the trophies. Although, it’s possible to loot some resources even if you lose the battle.

(4) Base: All the players in the Island War Raid game get their base on Island; the main building facility there is a city hall that must be protected well. You can cover it with the walls and enclose it with the troops. Enemies can raid from any side of the base; so make sure to cover/guard it well with the troops/walls and the defensive facilities such as archer tower, mortar, cannon, and bomb.

In the beginning, you already have three facilities on the island; a city hall, a gold mine, and an army camp. You can upgrade these facilities and get more privileges. For instance, the city hall upgrade unlocks a new boat so that you can take more troops on the raid, upgrading the gold mine increases the gem/gold production rate, and the army camp upgrade will increase the merge cap.

So this would be all in ths Island War: Raid game basics.

(2) Getting Troops: you can get the troops by spending the gold coins and the diamonds. On the home screen of the Island War Raid game, tap the troop card button on the bottom-right corner -> you will get a random troop(among the ones that you have unlocked so far). Or, navigate to the shop menu tab of the game -> under the troops recruit section, you can spend the coins on standard recruit that features common, rare, and epic rarity troops. And the premium recruit that costs x200 diamonds for x1 draw and x1.8K diamonds for x10 draws. The premium recruit banner features rare, epic, and legendary troops.

(3) Unlocking New Troops: you can unlock new troops by climbing up in the arena rankings(get victories by playing the game; each victory will grant you trophies);

In this Island War tier list, we have ranked the troops(tier 1 > tier 2> tier 3> tier 4 > tier 5) based on their ability to perform in the raid battles: –

Island War Raid game features a dozen of troop units with unqiue strengths. We advise you to get familiar with the troops’ traits so that you can assign them wisely on the boat;

Upgrade The Base Facilities⇓

On the home screen, tap the castle icon in the lower-left corner -> navigates to the base; there you can build the facilities with resources like wood. Tap on the built facility to get the upgrade option. Enclose the city hall and the mine facility well with troops and the wall. Place troops in all the direction as the enemies can deploy the troops from any direction.

Participate In The Events⇓

Events offer great rewards, but they don’t last for long and you can attempt a few of them only a certain times a day.

Sometimes, the game gives you the option to triple the reward by watching the video ad. Do it if you need the resources fast!

Island War game does not support the cheats or cheat codes.

So this would be all in this post on Island War game guide, tips & tricks; troop tier list for beginners. The heroes are not available in the game; as of writing this post. Got more tips? Share in the comments below!