In this guide, you will learn “how to play the WWE Undefeated game”, tips to winning matches, about the decks, rosters, and other info on mastering the game mechanics, progression, in-game currencies, and much more. So, let’s not waste any time and get straight to the main content: “WWE Undefeated guide, tips, cheats & strategies”: – 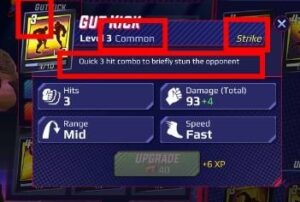 (1) Unlike other fighting games where you hack and slash or use the joystick or other controls to strike the opponent, WWE Undefeated battle mechanics are based on the “cards”. In the battle, you will be using the battle cards to knock down or pin down the opponent.

(2) There are many types of cards in the “WWE Undefeated game”; Grapple cards, Strike Cards, and Counter Cards.

(4) To use the card in the battle, you will need stamina or energy – stamina/energy replenishes as the battle continues. Do note that only those cards that you have added in the deck can be used in the fight.

(5) In the top-left corner, tap on the “deck” option to check the complete list of cards. Tap on a card and then tap on the info button to check its info. It’s important to get familiar with the cards as all of them are different from each other. Also, some cards only work in certain conditions. For instance, Peoples Elbow is one of the rare rarity cards in the WWE Undefeated game that only attacks the grounded opponents.

Play The Practice Mode Before Diving Into Real Action 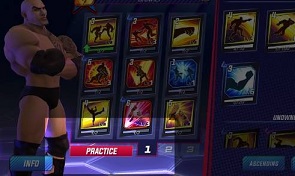 You might want to try out your own customized deck before fighting a real player. Thankfully, WWE Undefeated game features a practice mode that you can play and try out the deck that you have built. In practice mode, AI will challenge you. What you can do is try different-different combos with the cards and learn how each card works, when to play a card, how to counter an opponent’s move, grapple, pin down, etc.

Upgrade the deck cards to earn EXP. Accumulate enough EXP and the game will promote you to the next level. In the upper-left corner of the screen, you can check the current level of progress.

As you defeat the opponents in the real-battle mode, the game will give you trophies – upon accumulating a certain number of trophies, the league level goes up and you unlock new deck cards and superstar rosters. For instance, to reach league 2 in WWE Undefeated, you will need to accumulate x150 badges/trophies. There are x8 leagues and then you progress to bronze -> silver -> gold -> elite. The higher the league, the more tough opponent you encounter.

You can get the duplicate cards or new cards from the boxes available in the shop; cruiserweight box, super heavyweight box, heavyweight box, and epic box. It will cost gold coins to get these boxes. Other than that, you can earn the boxes by winning the matches. Although, those free boxes consume a certain amount of time to get opened.

(1) You will need gold coins to level up the superstars, open the boxes immediately(not recommended), buy premium boxes, superstar cards, battle bucks in the shop.

(2) Players in WWE Undefeated game can earn gold by completing the achievements, opening the boxes(mighty and corruption), or from the shop; IAPs.

Battle Buck is one of the in-game currencies in the “WWE Undefeated game”. You will need battle bucks to level up the superstar cards or superstars. Players can earn buck battles by opening the boxes, getting victories in the PvP battles, donating the shards in faction, or through trading/exchanging gold in the shop.

You will be able to join the faction once you reach league 2. Join an active faction and you will get to request or donate the superstar cards from the faction members. You can donate the cards and earn battle bucks.

Since the “WWE Undefeated” game is new, no ranking tier list for cards is available at the moment. Currently, the game features these cards(list of cards): –

Since the “WWE Undefeated” game is new, no ranking tier list for Rosters is available at the moment. Currently, the game features these cards(list of Rosters): –

As of now, no WWE Undefeated cheats are available – also, this game does not support cheats input or cheat codes input.

So this would be all in this post on “WWE Undefeated guide and tips for beginners”. Got more tips? Comment below!