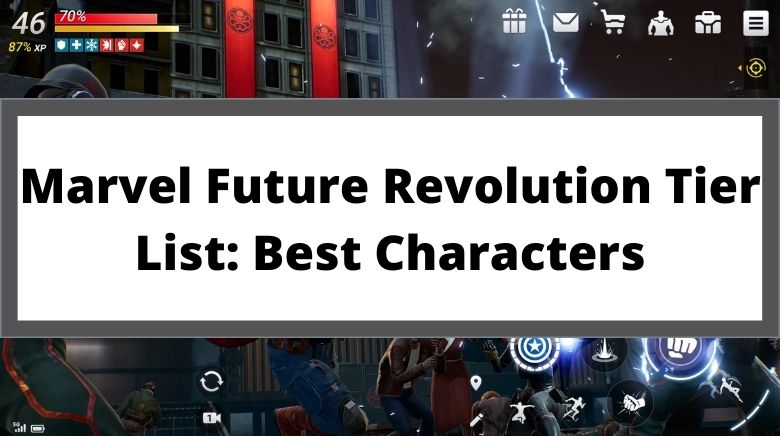 At the beginning of the game, you do get to try out each available character as a part of the tutorial, but you can only pick four characters to permanently unlock at first. You might be wondering which starter hero character is the best. The following Marvel Future Revolution tier list guide will help you figure out the best hero characters.

Doctor Strange and Captain America are the two best CC/Supporters characters in Marvel Future Revolution. Captain America can increase the DEF of allies. Speaking of Doctor Strange, he uses magic spells to crowd control enemies and enhances allies’ abilities from a distance. You will need to unlock his skill mastery effects for these effects; Eye of Agamotto(Glare of Confusion) effect confuses enemies during the battle and they would not be able to target Doctor Strange. Master of Mystic Arts Soul Enhance effect increases allies’ DEF pierce rate. Normal skills mostly cause DMG.

The best debuffer character would be Black Widow; she can apply the bleed effect, reduce the HP recovery, stamina recovery, and ATK of enemies.

The four best DPS/Damage Dealers characters that you can pick in the beginning are Captain Marvel, Iron Man, Black Widow, and Captain America(Tank+DPS). Doctor Strange and Spider-Man are the two good ones. Storm and Star-Lord are other decent characters with AoE DMG and CC skills. It’s hard to play as Black Widow as compared to building/playing Captain America(Tank+DPS). So if you are looking for a beginner-friendly DPS character, Captain America/Iron Man/Captain Marvel are the three best characters. Doctor Strange and Spider-Man are good too. And, Storm/Star-Lord are the two decent ones.

You need to build them wisely; equip skills/cores/omega cards that give them more DMG output.

The three best characters for PvP in Marvel Future Revolution are Spider-Man, Captain America, and Black Widow. If you want to be at the top in PvP, these three are the top-tier PvP heroes that you should be focusing on. Spider-Man is the best hero for PvP in our opinion. You can check Spider-Man’s PvP Build Here.

To get Hero Slot Expansion Tickets, you need in-game currency called Crystals. Crystal is the Marvel Future Revolution premium currency. You can get some free gems or crystals from these sources; daily log-in rewards, event rewards, or IAPs, and bonuses in the shop.

There is a 1.650K gem pack available in the shop, which would be enough to unlock the 4 slots immediately. If you are f2p, you will have to rely on events, login rewards, and bonuses.

In the above Marvel Future Revolution tier list guide, we have ranked all these characters.

Captain America is one of the top-picked heroes in Marvel Future Revolution. Captain America uses a vibrant shield as a weapon to strike enemies. He is a melee/short-ranged character with great DEF. If you love playing melee/short-ranged DPS characters in RPGs or action RPGs, you should pick Captain America. His DEF is great, so he can absorb a lot of incoming damage from the enemies. He also possesses skills that can increase allies’ DEF and decrease enemies’ DEF.

Captain Marvel excels in the damage aspect, she can inflict a good amount of DMG to multiple enemies at a time. If you are looking for a mid-range DPS character, Captain Marvel can be a good pick.

Spider-Man is another one of the best heroes in the game. Thanks to his high agile stats and strengths, he can easily evade the enemy ATKs. Other strengths include neutralizing enemies with web ATKs and good DMG.

Black Widow is known for her debuff skills that reduce HP Recovery/ATK/Stamina recovery and stealth mode; she approaches enemies stealthily and knocks them down in a flash. Black Widow has CC skills; she can confuse foes with various devices, quickly spotting an enemy’s weakness with her exceptional intelligence gathering and infiltration abilities to inflict great DMG in an instant.

Iron Man is one of the good ranged DPS characters with DMG/Debuff skills in Marvel Future Revolution.

Doctor Strange is known for his supportive skills, which help allies during the battle. He casts magic spells to support allies and take enemies down. He possesses CC skills, inflicts DMG from a distance, and enhances his allies’ abilities(requires skill mastery).

He is a good ranged DPS character with high agile stats.

Storm is known for her crowd control skills and excels in fighting against multiple enemies. She can control the weather of the battlefield to restrain enemies’ movements and cause AoE DMG.

So this would be all in this post on Marvel Future Revolution Tier List Guide: Best Starting Characters.