Looking for Puzzles & Survival gift codes to redeem? Find out the complete list of Puzzles and Survival redeem code and get in-game rewards 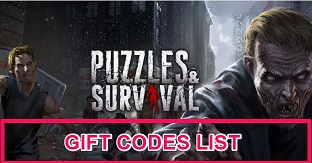 So far, we have discovered only these codes. If you know any other Puzzles & Survival gift code, please share it in the comments!

How To Redeem Puzzles and Survival Codes?

First things first – you can only redeem codes after completing the tutorial. After finishing all the tutorial steps, tap on the “MORE” option that’s in the lower-right corner of the main screen. Tapping the MORE button will show you two more options; leaderboard and settings. Tap on SETTINGS. Under the setting page, look for the “BOX” option. Tap the “BOX” Option. Input the code. All the codes are listed above. Redeem them and you will get the rewards immediately.

How To Get More Puzzles and Survival Codes?

Alternatively, you can visit this page often for new code updates. We put all codes together on this page. Also, if you know any active code that’s not listed on this page, please do share it in the comments!

So that’s all we got in this post on Puzzles and Survival codes: gift codes, redeem codes!

Puzzles & Survival is an MMORTS game by 37games. Unlike other MMORTS games, this game’s PvE campaign mode is based on puzzle RPG mechanics where you match the same color tiles and strike the enemies. Based on the color/type of the tiles that you match, heroes gain rage and unleash their unqiue skills. Let’s learn everything in detail in this Puzzles & Survival guide packed with tips, cheats & strategies for beginners: –

How To Play Puzzles & Survival Game?

If you have not played games like this before, then this part is for you. In this game, you will be playing as a commander of the sanctuary/base. What you do is build an army of troops to fight enemies in PvP, PvE, rally battles. Grow the sanctuary; at your sanctuary/base, you have plenty of unqiue facilities like headquarter, training camps, production-based camps, etc. Each base facility has a unqiue function. Read the buildings guide below for more details.

(2) At the start of the game, your sanctuary has a pre-default shield active that secures your army and resources from being attacked and plundered from invaders. Once this shield depletes completely, other commanders will be able to invade your sanctuary and loot the resources. As a commander of the sanctuary, it’s your responsibility to not let this happen; raise the might and scare away your rivals!

At the top of the screen, next to the VIP, you can check the current might/power.

Players in Puzzles & Survival game can improve their might by upgrading the heroes, training the troop units, researching the techs, upgrading the buildings, equipping gears to the commander, and crafting the traps. You need to build a trap factory in the sanctuary base first.

How To Battle In Puzzles & Survival Game?

There are plenty of battle game modes in the game – and, each battle mode has a different gameplay system. In this part, we will cover the campaign battles, PvP Arena battles, PvE battles, and PvP battles.

(1) Campaign Battles: – you can access the campaign battle mode by tapping the aircraft station in the sanctuary/base. This will take you to the campaign map where you can select the stage; players can repeat a stage multiple times and earn free rewards. After selecting the stage, you will have to select the heroes that you want to fight with; choose carefully; the higher the star level of a hero, the more powerful its stats.

Unlike PvP and world map PvE battles, you don’t need troops in this game mode. All you have to do is match the tiles on the board to strike down the enemies. Tip: try to fill the rage gauge of heroes to use their hero skills. There are five types of blocks/tiles on the board; red/rash, calm/blue, avid/purple, wary/yellow, and brave/green. Also, heroes in the game belong to one of these battle styles; red/rash, calm/blue, avid/purple, wary/yellow, and brave/green. Check the hero’s card color background to figure out its battle style. If you match the same style tiles on the board, the respective hero’s skill gauge will fill up and once it’s full, you can unleash its skill. From the campaign battles, one can earn speed-ups, recruit coins, and combat manuals.

(3) World Map PvE Battles: In the Puzzles & Survival game, another PvE mode is world PvE mode. Head to the world map and you will find zombie/nurses, zombie lairs. Target these enemies; starting from a low level. You can earn free resources, hero fragments, gear material, etc. The difference between campaign PvE and world PvE mode is that you need troops in world PvE mode.

(4) World PvP Battle Mode: In the world PvP mode, which is one of the main aspects of the Puzzles & Survival game, you target another player’s sanctuary and loots its resources. Navigate to the world map and find a sanctuary with no active shield -> send scout first and get the intel. Read the intel in the mailbox and based on that prepare a squad of heroes + troops. You must have more powerful heroes than the target + troops with advantage by type.

What Are The Best Heroes In Puzzles & Survival Game?

The 5-star and 6-star heroes are the best ones in the Puzzles & Survival game – but, they are hard to get. Also, you need to use them properly; there are five types of heroes in this game; economy, fighter, shooter, rider, and vehicle. You can check the type of a hero by going to its profile from the hero menu and tapping its type icon at the top; near the name.

How to get heroes in Puzzles & Survival?

How to make heroes stronger?

Level them up using EXP, enhance them once you have enough fragments. And, evolve them with combat manuals. Evolving will raise their max level cap and unlock new abilities.

What Are Troops In Puzzles & Survival?

In the world PvP and PvE battles, you dispatch an army of troops. These troops are fighters, riders, shooters, and vehicles. After completing chapter 2 in the game, you can produce these troops in the fighter camps, rider camps, shooter camps, and vehicle camps.

Certain types of troops in Puzzles & Survival are strong against each other. Fighters > Shooters. Shooters > Riders. Riders> Fighters.

So that’s all we got in this post on Puzzles & Survival guide, tips, and codes.