Wondering what heroes are the best in Shining Beyond? Take a look at this “Shining Beyond tier list” and reroll guide to pull top-tier SSR characters 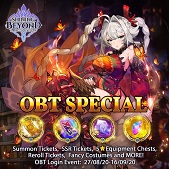 Heroes in the tier 1 list are the best ones and deliver a great performance in all sorts of modes and against powerful opponents: –

This Tier 2 characters list showcases the heroes that do well in the battles(good to best performance): –

Tier 3 hero characters have average to good performance in the combat- may shine and do well if you use them with a good team: –

Tier 4 characters list: these are the least recommend hero characters(bad to average performance): –

(Note: a developed SR grade hero can outperform an underdeveloped SSR hero. Since SSR heroes are hard to rank-up as compared to SR heroes, you might consider adding/developing SR heroes. Scroll down below to check the good SR characters’ recommendations).

Shining Beyond Reroll Guide Intro: – To reroll for top-tier characters in Shining Beyond, you can use multiple email accounts as the guest account method is not working in the OBT version. Register with an email address like [email protected] to start. If you don’t get the top-tier favorite character, start again by registering another email account; [email protected]

Reroll Process: – Follow the tutorial and continue to the game and claim x10 roll. You can progress further in the “Bootcamp” and claim a free SSR selector ticket. And do other quests and archives for gems. Spend all in the summon! Aim: –  We would recommend you to reroll for top-tier SSR characters. The Shining Beyond tier list is above. If you have got it, continue playing the game. If not, then login with another account, or if you are on Android, you can clear the game data and start again(this reroll method is not recommended. Go with multiple accounts). So that’s all in this Shining Beyond reroll guide.

About Shining Beyond Character Classes⇓

In Shining Beyond, characters are divided into four class groups; Rogue, Warrior, Acolyte, and Archer/Ranger. Rogue; offense, low defense. Warrior; high defense. Archer; great attack damage. Acolyte; buff, supporter, mage. As you continue to progress in the Shining Beyond, you can further promote the class to available jobs; each class can progress to specific six jobs.