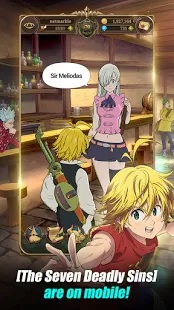 Here’s the complete list of 7DS codes for the secret box as of September 2020: –

Code Number 6 is “Thanks“. Redeem this 7DS Secret Box code to get freebies; valuable rewards including heroes, gems/diamonds, or other stuff. This code was released on September 14, 2020. The next 7DS code will be issued on September 21, 2020.

Secret Box Code Number 5 is “Assassin“. Redeem this new 7DS Secret Box code to get lucrative rewards including premium currency or gems. This Seven Deadly Sins Grand Cross was released on September 7, 2020. A new code will be issued on September 14, 2020.

Secret Box Code Number 2 is “7DS100“. On the occasion of 100 days since the global release, this code was released. Redeem this secret box code for rewards.

Secret Box Code Number 1 is “Sunshine“. Sunshine is the first secret box code for the 7DS global version. Redeem it for 300K gold.

From the menu list, tap on the “item storage” option. Go to the 1-use tab. Tap the secret box to use it – to open the secret box in 7DS, you will need a code. We have listed all the 7DS codes for the secret box above. Use those codes and get rewards. We update this list of 7DS secret box codes regularly.

So that’s all we got in this post on 7DS Secret Box Code!