Black Command is a brilliant strategy game for mobile by Capcom. Check out our Black Command guide, tips, cheats & strategies

Black Command is a military simulation game for mobile by Capcom in which the player recruits mercs and go on missions. Black Command game features a number of game modes; level missions, arena, wars, and more. And it also features a unique concept. If you are having trouble destroying the forts, command centers or completing the missions in the given time, then we are here to help you. In today’s post, we have covered everything about the game you need to know as a rookie; Black Command guide and Black Command cheats, tips & strategies to master the game.

Get Started – The Basics – Black Command – The Whole Concept

Before we move to the main guide, tips, cheats & strategy part, let’s take a look at the basics first. In Black Command game, you play as a commander and give the instructions to the mercs in the battle. The concept of this game is quite simple; first, you hire the mercs. Mercs are the main characters in Black Command game. And unlike other games, you can not revive the killed mercs. Of course, you can hire them anytime for money.

In most of the battles, you have to destroy the enemy forts, HQ or rescue the hostage. We will go deep into the battle details in the guide part below. Upon getting the victory, you earn money or weapons. Killed mercs would not join you in the next war. You must send them back to their home to free up barracks(Barracks capacity is limited). And hire more mercs to fill up the empty slots.

Another important thing in Black Command game is ammo. In each mission, you have limited ammo. And you must use ammo wisely and to play the turn, you must meet the minimum ammo requirement. You can resupply ammo using gold/ammo crate or skip your turn(Read the battle guide below).

In addition to the money and weapons, you also earn XP or mercs in the team gain XP(required to level up). As you gain XP, your PMC level will increase and new features such as PMC stats, sponsors, skill manual, and more.

In Black Command game, gold is the premium in-game currency. You can use it to buy premium items or in resupplying the ammo or in the battle when the situation got worse+to increase the chances of getting weapons from arms network. You can earn gold by completing the tasks. Here’s the screen guide: – 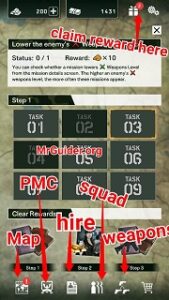 In this part, we will learn about the weapons, skills, mercs, hiring, squad management, world map, and much more.

In Black Command game, mercs are classified on the basis of class;

Pro and high-rank mercs have unique skills that help them in the battle. For example; Renata(Pro) has an SMG Rolling Thunder skill that activated when you equip SMG to Renata. The skill grants chances to avoid fire when retreating whereas rookie mercs do not come with any skill. You can hire the mercs for cash.

Go to the hire menu ->  there you can check the list or mercs. Tap and recruit. The list updates every certain amount of time. By tapping the find more button, you can get more choices, but it will cost you gold or money.

The drop rate of mercs is mentioned above(% or chances of obtaining a rookie, pro, expert, legend, master, and veteran).

Mercs killed in the war would not join you in the next war. Make sure to send them back to their home. Go to the PMC menu -> head to the barracks tab -> tap the merc(retrieve belongings). In return, you could get skill manuals(use service book to get) or money.

In Black Command game, there are a number of weapons; Handgun, Assault Rifles, Sniper Rifles, Light Machine Gun, Submachine gun. All these weapons have different stats. How to get weapons? You need intel. Intel can be found in the battle by destroying the enemies. If you have, then go to the weapons tab -> tap that weapon(there would be an ! icon or new label) -> tap the lock icon -> buy. Tapping the weapon also show you its stats; accuracy, range, reliability, operability. Here is the detail: –

Go to the squad tab -> tap a character -> tap the equipped gun -> choose another one.

As mentioned above, high-rank mercs come with default skills. You can also teach them a skill using skill manual. How to get a skill manual? Retrieve the martyred soldiers. If you have, go to the barracks menu -> train skill -> tap the skill manual -> choose the Merc.

By default, you barracks have a capacity of 10. After it, you would not be able to add more Mercs to the barracks. If there is a Pro or higher rank Merc available in recruitment, then make sure to grab that deal and fire a rookie Merc. How to fire? Go to the barracks menu -> arsenal -> Mercs -> at the top, tap the fire button and select the free Merc. You can not fire an assigned Merc. First, remove them from the squad. 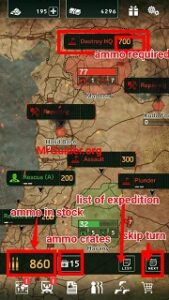 Head to the world map and there you can access all the available missions. Tap the location and on the next screen, you can check the ammo requirements, ammo in stock, list, number of ammo crates.

Ammo is limited. Prior to the battle, you can use ammo crate to increase the stock-ammo. You can use stock-ammo as much as you can in the battle. Or tap the next button to let the enemy play its turn. After it, you will get the ammo.

Rescue Battles or optional battles have shown as green color. Enemy battles have shown as red color. It’s up to you; you can skip or play the rescue battles. Keep in mind that ammo is limited. If you are going to play these optional battles, make sure to don’t use ammo too much(or no). However, rescued characters will help you with powerful support(tapping the rescue battle will show you the details; below target, you can check it). 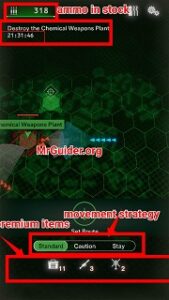 All you need to do is progress on the basis of mission. For example; the mission is to destroy the fort, then move your army there and destroy. Set the route and move. Drag the pointer to adjust the route. There are three options; standard, caution, stay.

And just below these three options, there would be three icons; ammo crate(fills up the ammo), helicopter(air-strike), anti-tank rocket(destroy enemy tanks).

And at last, there is one more item in Black Command game; Pickaxe(it is used in digging; reach the level 5-PMC -> Viking treasure).

1.) Approach From Behind To Save Ammo, Kill Enemies

2.) When Low On Ammo, Head To The Ammo Depot

3.) Make Sure To Check Out The Posts

Before you progress in the battle, swipe or analyze all the battlefield; there would be some stations too; sniper post – from here you can shoot enemies(long range), hidden vault – from here you can get Intel or other items, ammo depot post – obtain ammo, gunpowder shed – lure nearby enemies(deal damage, trap).

4.) Focus On The Missions Rather Than Kills

Your primary focus should be on the objective that you have to complete in the given time. On the other hand, if you are focusing only on killing the enemies, then the time will run out and the mission will be failed. You can even complete some missions without battling against the enemy groups. All you need to do is make the right movement path.

5.) Change The Strategy On The Basis Of Situation

At the bottom of the screen, you can check the strategy; standard, caution, and stay. Choosing standard will increase the marching speed, but when passing across the enemy’s side, you may get attacked. Choosing the caution will reduce the marching speed, but you would be able to retreat(pleasantly) – you have two options; strike first or retreat. Choose retreat to move on, choose strike first to stop and attack.

6.) Complete The Tasks For Gold, Items, And Money

Go to the world map – tactical drills -> tap the task to know -> complete these tasks to get rewards; gold, money, items, and much more. Completing the set of reward will grant you a special reward.

7.) Pay Attention To The Sponsor Offers

In the PMC Menum just below the PMC stats section, you can access sponsor missions. Increase the level of PMC to unlock more sponsors. Complete the sponsor missions to get precious items every day.

Once you reach the level 3, a new feature will get unlocked in Black Command game; PMC stats. You can access it in the PMC Menu. Under the PMC stats section, choose a stat and upgrade it. Here’s the detail: –

9.) Buy And Use Premium Items

In some battles, when the enemy is in huge numbers, an air-strike would help you in the clearing the mission. At the bottom of the battle screen, tap the helicopter icon to request the strike on the desired point. Or use an anti-tank missile to destroy enemy tanks. You can buy these items in the shop menu for money.

So these are our top Black Command tips, cheats & a strategy guide for the beginners. Also, see – Top new Android games of this week