Fingersoft has done a great job in designing this type of idle game; it mixes the idle/incremental clicker mechanics with the racing gameplay.  In this guide, you will learn “how to play the Garage Empire game”, a guide to making more money, locations, race, driver cars, and other aspects such as city progress, in-game currencies, making upgrades, and much more. Let’s not waste any time and get straight to the main content: “Garage Empire cheats”, guide, tips & tricks for newbies: – 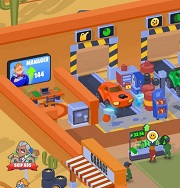 (1) The best way to make more cash in the Garage Empire game is by making upgrades to the manager and product value. When you increase the product value at your garage, the customers will pay more cash. The manager collects the cash from the garage stands and takes it to the locker/safe. The amount of cash the manager can carry per round depends on its level. So make sure to upgrade the manager and increase the carrying capacity. In the upper-left corner, you will see the earnings; per minute.

(2) Other than the products, you also earn money/cash from the cars that drive around the garage. Whenever a car crosses the finish line, you will earn money. How to earn more: what you can do is tap on the cars and boost their speed so that they will cross the finish line quickly. Also, make sure to repair the cars and build the gas stations around the garage. Cars will stop at these gas stations and refuel automatically.

(3) Make sure to tap on the “driver cars” if you want to make money from them. Unlike normal cars with normal racers, these race cars with premium racers are not part of an infinite race loop.

The Track Upgrades Are Very Powerful

In the Garage Empire, you can upgrade each track in each city to 5⭐. In the upper-left corner, tap on the city track icon -> there you will see the track upgrades that will massively improve the earnings from cars racing on it.

How To Unlock New City In Garage Empire 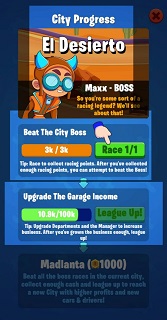 There are many cities in the Garage Empire where you can open the race track and garage business. To unlock new cities or tracks, you will need to beat the “city boss”, collect enough cash, and “league up”. In the upper-left corner of the game screen, below the city icon, there would a boss character(racer) button -> tap it -> beat the city boss by winning the race and league up by collecting enough cash.

To challenge the city boss in the “Garage Empire” game, you will need to earn a certain number of racing points first.

Tap the race button in the lower-right corner -> select the car -> select the track -> complete the laps and get the racing points. The race controls are beginner-friendly – all you need to do is touch and hold to race. The driver steers automatically. To brake, lift the finger from the race button. After the race is finished, based on the position/rank, you will get the rewards. The race rewards include Driver EXP, bucks, racing points, etc.

(1) All the cars in the Garage Empire game have six attributes: Acceleration, Grip, Speed, Suspension, Steering, and Tuning. Premium cars have better stats as compared to the cars that one can unlock by beating the boss. That does not mean free cars are useless – in the early game, these cars can help you win the boss race as well as competitive race.

(2) Players can improve the car stats with the racing points that you get by winning the race. Tap the car button in the lower-left corner -> select a car -> tap on the upgrade button to use the racing points and power up the stats.

(3) Drivers or Racers gain EXP when you take them out for the race. After finishing the race, they will gain EXP and level up at a certain point. Increase their level and gain the skill points that you can allocate to boost their stats such as left boost, right boost, acceleration, rocket fuel, etc.

Gems: earn by watching the video ads, completing the quests, or the shop. Tip: save gems and buy a premium car with better stats.

Racing Points: earn from the race. Spend on car upgrades.

Skill Points: earn by leveling up the racers. Spend on upgrading the racers.

Garage Empire game does not support the cheats or the cheat codes. Read the tips above to progress fast.

So this would be all in this post on Garage Empire cheats, guide, and tips for beginners. Got more tips? Comment below!