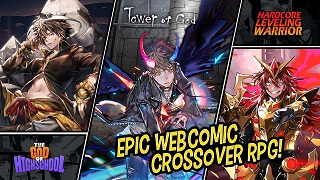 NGEL GAMES Co., Ltd. recently released the global version of Hero Cantare game on Google Play Store and iOS App Store. The game features characters from the Tower of God, Hardcore Leveling Warrior, God of High School series, and let you play with them; you get to add them to your team, develop them, and unleash their skills in the battle. The game features a lot of currencies and hero shards system – with the help of the redemption codes, players might get the hero shards or other currencies in the game. This post covers all the info on Hero Cantare Codes – so let’s not waste any time and learn how to redeem and get the gift codes.

Gift Code no.2 is “SUMMERSPIRIT“. With this new Hero Cantare redeem code, players will get the essence of dimension. Copy this code from the box below. This code was announced on July 29, 2020. It will work for Hero Cantare global and SEA versions.

Gift Code no. 1 is “WELCOMEHERO“. By this Hero Cantare code, players can get gold coins and diamonds. Redeem this code before it expires. Go to the game settings -> account -> redemption code -> type the code “WELCOMEHERO“. This code grants x500 gems that you can exchange for the essence of dimension, which can be used to draw the characters. Update – it seems that the code is not working anymore. We will update this article with new Hero Cantare code as soon as the developers announce them.

How To Redeem Hero Cantare Codes⇓

To redeem the Hero Cantare gift redemption code, the player needs to tap the “gear” icon in the upper-right corner on the “main screen”. Then go to the account settings tab -> tap the “redemption code” button and enter the “gift code”. After that, you will get the reward immediately or in the mailbox. Note – it seems that the iOS version of the game does not feature the code function[UPDATE – iOS version got an update and the redemption code function is now available). If you are on Android, you can redeem the Hero Cantare code with the method shared above.

How To Get Redeem Codes?

Players playing the Hero Cantare game can get the redemption codes from the community pages of the game. Follow the game’s official FB page, Discord, FB group, Reddit, and keep an eye on the moderators’ posts. On special events in the game, they might announce the codes on these community pages. So make sure to join them and keep following their new posts. Or keep checking this post for working new codes to claim gifts.

So this would be all in this post on Hero Cantare codes to redeem. If you have any other new code, share it in the comment section below! This code list was last update in 2021.