This Hustle Castle guide for beginners covers how to play basics info, about the dwellers, babies, rooms, and other things such as their roles, getting diamonds, progression, and much more. So, let’s get straight to the Hustle Castle guide and tips: –

Guide To Dwellers In Hustle Castle 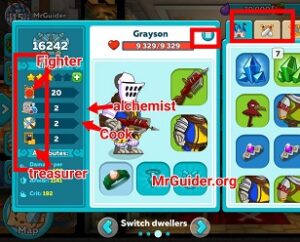 Dwellers are the main characters in the Hustle Castle game. By default, you have some dwellers in the castle. These dwellers are rated as follows; 1-star, 2-star, 3-star, 4-star, and 5-star. Depending on their role level, you have to upgrade them. Dwellers roles are: –

How to identify the role? Well, all the characters can perform any job; fighter, cook, alchemist, and as treasurer. But their role’s level determines the field in which they are well. For example; You have a dweller and its stats are as follows: –

From the above table, we get the conclusion is this dweller is good at cooking as its cooking level is high as compared to other roles. All you need to do is tap the dweller/character to check its detail.

Place The Dwellers Based On Their Attribute Strengths

You have to place the Dwellers according to their roles to get more benefits. For example; place the cook(the dweller with high cooking attribute points) in the Dining hall, Alchemist in the mana well, Fighter in the barracks, and Treasurer in the treasury.

Among all these, fighters are really important. You have to increase their role’s level constantly to defeat the powerful enemies in the PvP, arena/tournament, or in the invasion battle. Let’s learn about the fighters.

Guide To Fighters In Hustle Castle 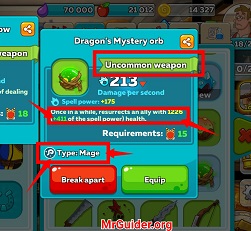 As mentioned above, it’s all up to you how well you build the dwellers in the Hustle Castle game. Here’s how: – There are three main sub-roles in fighter class; Mage, Tank, and Archer. First of all, you should know how to assign these roles to a fighter. It’s all up to you; you can make a tank character, healer, reviver, archer. All you need to do is choose the weapon wisely. Let’s learn about gears/weapons.

Guide To Gears In Hustle Castle

To increase the power of a dweller in the Hustle Castle game, you can equip gears(Armor, weapon, accessory). Depending on the weapon type, your character will get a specific role; Mage, tank, archer. For example; if you equip a sword to the dweller, then it will work as a tank character.

On the main screen, at the bottom-left corner, tap the chest button just above the map option -> go to the weapon tab -> there you can check the weapon’s details; tap the weapon to check its type; Mage, Archer, or Tank.

Similarly, armors can be equipped to the dwellers. Armor types: –

To equip high-rank weapons, armors to the dwellers, dwellers must meet the role level requirement. You would not be able to equip it if the role level is low. How to increase the attribute/role level? Train them. You can train the fighters in a fighter training room. Cook in the kitchen. Treasurers in the Mint. The alchemist in the laboratory. As they get trained, the corresponding attribute will rise and they will get to equip high-level gears.

Getting Dwellers In Hustle Castle Game

Getting Gears In Hustle Castle

Defeat the enemies in the campaign mode(invasion battles) or in PvP, tournament to get the chests. From these chests, you get the gears.

Get To Know The Game Modes

In the Hustle Castle game, there are three main game modes; campaign mode(Invasion battles), PvP, and arena/tournament. In the campaign mode, you battle against the enemies in different zones(tap the map option -> choose a region -> battle). In the PvP mode, you raid other player’s castle and earn their resources.

Map -> above the regions, you can check the number of invasion battles or enemies -> enter the zone -> tap the enemy -> scout -> if your power is(power -> total strength of fighters, placed in the barrack) high, then attack the enemy castle and loot resources.

And in the arena mode or tournament mode, you compete against other players from all over the world in real-time. The tournament held between 15 players(including you). Attack the players and earn points in all the rounds. Additionally, you earn the badge of courage; you can exchange these points for artifacts or precious weapons.

Tap the dweller -> tap the menu button(near dweller’s name) -> banish. Since 1-star and 2-star characters are useless(not in the early game), it would be better to show them the exit.

Food, Wood, Mana, Gold, Iron are the main resources in the Hustle Castle game. These resources are required to craft spells(mana), upgrade buildings, in building facilities, crafting, and more tasks.

Make sure to build the storage for these resources to store more. For example; Build iron depot to store Iron, store wood in the shed.

Throne Room is the core of the castle; Upgrade it to unlock new features, facilities, and upgrades for other rooms. You can customize the castle by tapping the throne room -> castle editor.

Save Diamonds And Recruit The Builder

By default, the game provides one builder to the player. You can recruit more using diamonds. Since the builder is required to build and upgrade the rooms, it significantly impacts the game’s progress. Make sure to don’t spend diamonds in the useless tasks and keep saving until you get the second builder. You can recruit the second builder for 750 diamonds. How to get diamonds in Hustle Castle game? Watch the video ad daily to get 5 diamonds per day. Remove the obstacles with dynamite to get diamonds(near rooms, there would be some obstacles -> tap -> delete).

Getting powerful gears in the Hustle Castle game is not too difficult. After reaching a certain level, you will be able to build the weapon workshop in the castle. In the weapon workshop facility, the player can craft powerful gears for free; Mage, Archer, and Tank. You can even craft rare, epic, and legendary weapon. All you need is shards? How to get? Dismantle the useless items to get shards. Go to the inventory(tap the chest button, just above the map option -> tap on an item – break apart – get the shards). Depending on the item(you destroyed), you get shards. For example; breaking rare item grants rare shard.

And as you know, to equip the weapon, dwellers must meet the role’s level requirement. Train the fighters in the fighter training room to increase their role level.

Either you are building or upgrading a room in Hustle Castle, it takes time. The player can reduce the time by sending free dwellers to that room. Tap that room -> info -> tap the + icon -> drag and drop a dweller to the empty slot.

Complete All Quests To Get A Rare Chest

Completing the quest rewards you a number of items for free. The game gives you lots of quests daily. Completing all the daily quests reward you a rare chest and from the rare chest, you could get precious items; better gears, resources or more.

Focus On The 3-Star Or Higher Grade Dwellers

Obtaining a 4-star or 5-star dweller would not be easy for the beginner(keep sending the 3-star male+3-star female to living room until you get), so we would recommend focussing on the 3-star grade characters as 1-star and 2-star character are useless(because of low-level attributes/stats). 3-Star characters are average. However, you would not be able to dominate in long run with 3-star characters. The reason is as you move to the higher league, your progress rate will go down.

As you know, you can raid the enemy’s castle(read the game mode guide above for more info) and loot the resources. Similarly, other players can loot your resources by raiding. Make sure to increase the defense of castle; place better fighters in the barracks(upgrade barracks to place more fighters), upgrade the Arsenal and unlock defense technologies; upgrade those technologies to increase more. Where is the arsenal? Just below the fighter training room.

So these are our top Hustle Castle tips, cheats & a guide for the beginners.

Hustle Castle: Fantasy Kingdom is one of the best games on Google Play Store and App Store. It was released in 2017 and has crossed over 5 million downloads on Google Play Store. And the reason behind its success is its unique gameplay, characters, and regular updates. In this post, we have covered everything about the game you need to know as a beginner; Hustle Castle Guide and Hustle Castle cheats, tips, strategy to progress fast.

Build the living room and place a male dweller and female dweller. After it, they will start dating each other. After a certain amount of time, the female character will become pregnant and will birth to a girl or a boy.

You can keep track of the pregnancy status by tapping on the female character. The baby will grow up and become the dweller after 6 hours(approx.). Read the Hustle Castle cheats, tips below to know how to get a 5-star baby/character. Repeat the process with another female character of your castle to get another baby.

At the beginning of the game, you have no armors and equipment, it would be better to complete the quest and battle in initial stages. Complete the quest, earlier stages; you will get rewards such as armors, weapons, and other items.