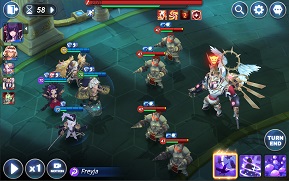 Tier 1 Heroes are the best ones. You might want to reroll for one of these heroes at the start of the game. You can check the reroll guide here. These are the tier 1 heroes –

Ingway is one of the top-tier heroes in the Kingdom of Heroes Tactics war. You can select him in the beginning – with you 5-star hero select summon chest. Here’s the skill info –

Vivian is one of the best healers in the Kingdom of Heroes Tactics war. This hero might not help you in the early game – but, in the late game, you are likely to use her in the line-up for healing effects. Another great character to reroll for. Also, the best healer in our opinion.

So these are the best six heroes that we have featured in the Kingdom of Heroes Tactics war tier list: tier 1.

Tier 2 heroes are slightly less powerful than the tier 1 heroes. But, strategically using them in the team can unleash more potential – that can match the power of tier 1 heroes. Here’s the list of tier 2 heroes: –

Claudia is one of the best DPS heroes in the KoH Tactics war. Also, one of the best heroes to reroll for. With the DPS skills this character has, one can inflict a high volume of damage to the enemies. Pretty good in the early game, mid-game, as well as late-game.

Ifrit is a tier #3 melee DPS heroes that use a sword to unleash damage; well-known for casting continuous damage on the enemies. You can get her in the beginning with your 5-star hero selection summon chest. Here’s the skill info: –

Demeter is a 5-star supporter unit with great supportive skills. In many battle stages, you will need a supporter/buffer; Demeter could be a good pick.

Tier 4 heroes are less powerful units as compared to tier 3/2/1. So, we don’t recommend you spend resources on developing these hero units. Of course, they can perform well in the early game as the early game stages are pretty easy to clear. But, as you move on the high stages, you might want the heroes that we have listed in tier 1 and tier 2 list.

4-Star heroes might not perform well in the late game, but they can sure help you in the early stages. As you proceed further, it would be good to focus on 5-star heroes. Nevertheless, here is the list of some good 4-star heroes(excellent > good > average > bad): –

So that’s all we got in this post on the Kingdom of Heroes tier list: best heroes. Read reroll guide. Join the KoH tactics war community: Facebook, Reddit, Korean Groups, FB Global Groups to keep an eye on the game’s latest events and info.