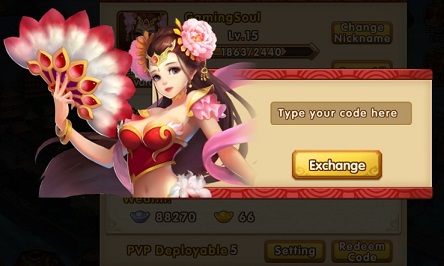 EYOUGAME, one of the popular mobile game developers, recently published a unqiue TD game on mobile called Pocket Kingdom TD. There are lots of premium currencies in the game such as coins, sycee EXP, gears, top-recruit order, etc. that you can get for free by redeeming the codes. The developers of the game issue these codes on their community pages and you can ask them individually for the unique code. Let’s learn everything in detail and find out how to get and redeem the Pocket Kingdom TD code.

To redeem the code, you need to tap the hero avatar that you see in the upper-left corner of the game screen. Tapping the avatar opens the player profile where you will see the redeem code button next to the settings. Tap the “redeem code” button and enter the code. After that, tap the “exchange” button to exchange the redeem code for rewards such as top-order recruitment scroll, Sycee, coins, etc.

How To Get The Pocket Kingdom TD Code?

The best way to get the redeem code in this game is by asking the developers for the unique code; if you are on FB, like the Eyougame FB page and message them using the messenger app and ask for the “Pocket Kingdom TD redeem code”. Within 24-hours, you will get the reply with a unique code from their social media handle. Follow the above process and redeem the code. These unique codes are issued by the developers to the players individually. So you must contact them. Other than that, you can follow them on other community handles; YouTube, Twitter, Instagram, Reddit, or game exclusive community pages.

For the universal codes, we recommend following the game’s community handles. Go to FB and search for Pocket Kingdom TD page. Like and follow them and keep an eye on the posts. Universal codes are announced on special events. Since the game is new, the developers of the game have not issued the universal code so far.

So this would be all in this post on Pocket Kingdom TD codes to redeem. If you have any code, comment below.