Get started in SINoAlice Global with this beginner’s guide featuring the SINoAlice tier list(weapon tier list), reroll guide, list of characters & their classes, and much more

SINoALICE global version has just been released for Android & iOS. In the game, the player builds the character classes by gearing them up with the weapons that can unleash their full potential. You will get stronger by upgrading the classes, weapons, performing limit-break using Arcana. To master the game mechanics, one must know about the weapons, characters, and the classes. If you are new to the SINoALICE global, then you have come to the right page. In this post, we have shared the SINoALICE Tier List: weapon tier list and character classes list with a detailed guide. So, without any further ado, let’s get started and check out the tier list.

Following is the SINoALICE Tier List: the weapon tier list featuring the best SR-tier weapons(types; Blade, Staff, Tome, Artifact, Heavy, Polearm, Instrument, and Projectile – If you don’t know about the weapon types, then read the guide below.) list. Weapons are available in four tiers/rarities; L Tier, SR Tier, S Tier, and A-Tier. The higher the rarity tier of the weapon, the higher the weapon’s characteristics and skills. (L-Tier > SR-Tier> S-Tier> A-Tier).  You can get the SR, S, and A tier weapons in the early game(from Grimoire) –

The first five weapons in the tier list unlock character classes(when you get these weapons from Grimoire, you will get the corresponding character class unit). Staff of Bondage – Alice Cleric Class. Blade of Depravity – Cinderella Breaker. Tome of Dependence – Pinocchio Sorcerer. Staff of Masochism – Princess Kaguya Cleric. Fiddle of Delusion – Gretel Minstrel. 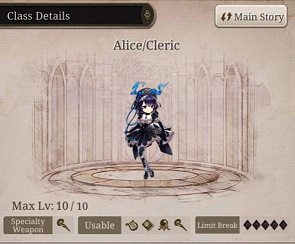 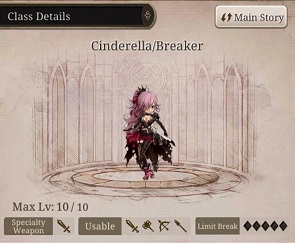 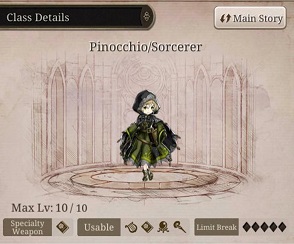 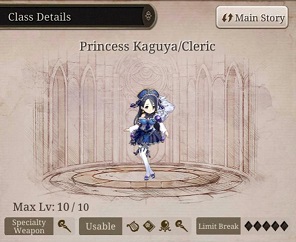 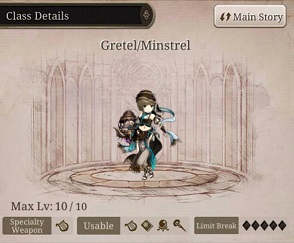 These S/SR-Tier weapons are the best ones. Now, let’s take a look at the rest of the list –

So that’s the complete list of SR weapons featured in Sinoalice Global version.

As of writing this, Sinoalice Global features 22 character classes(all the characters in the game are available in multiple classes. For example – Snow White Cleric and Snow White Breaker – one character in two classes). First, check out the classes: – there are mainly two kinds of classes; Damage and Assist/Support type.

After completing the tutorial, you will be able to access the menu of the game. Head to the menu and there you will see the codex option. Inside the codex, there would be four tabs; weapon, armor, nightmare, and class. Go to the class tab. Tap the filter button and choose a character.

A player can strengthen the particular character class by leveling up, equipping gears; armor, weapons, and nightmare.

How To Get Arcana And Limit-Break Characters

Players playing the Sinoalice Global game can get Arcana from the medal shop. Navigate to the menu screen of the game and tap on the medal exchange option. If you tap the medal icon, you will see the information on how to get it. For example –

If you have the medals, tap the Choose button next to it to open the exchange shop. There you will find arcana deals to grab – for each character, there is a unqiue arcana.

Staff/Instrument/Tome/Artifact – these weapons are suitable for the supporter classes. The staff weapon possesses the ability to heal comrades. Instrument weapon helps support the comrades with buffs. Tome weapon has skills that put harmful effects on the enemies.  Artifact weapons cause magical damage.

Blade/Polearm/Projectile/Heavy – these are the DPS-type weapons – suitable for DPS classes. Blade and Heavy weapons inflict PHY DMG(Single-target, multi-target). Projectile and Polearm weapons inflict magical damage(Single-target, multi-target). We have mentioned the best/top-tier ones at the top. Focus on high-grade SR weapons rather than investing in A-rarity tier weapons. Here’s how to obtain the weapons in Sinoalice Global: –

Tips – upgrade gears(use useless gears as the upgrade material – acquire from the story mode), limit-break the gears(raise max level cap of weapons – the same type of gear would be needed to limit-break).  Evolve the gears – gather evolution material from the time-limited events(story mode screen -> events). Also, make sure that gear is at its max level.

Sinoalice Reroll Guide To Get Started

We advise you to reroll for the weapons that unlock character classes or another choice is rerolling for two weapons of the same type – SR-Tier/Rarity. How to reroll – on Android/iOS – players get 11 grimoires to open in the beginning. Open all of them – if the result meets your expectation, tap the OK button, and continue to the main game. If not, then open another grimoire. The JP version does not give the option to open another grimoire – but, the global version does – making rerolling easy.