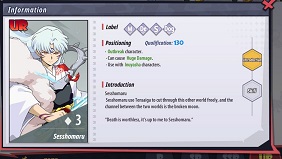 The first thing you need to know is that partner or characters or heroes in Inuyasha Awakening is available in different-different grades and have different skills and strategic positions. For example – Inuyasha is available in three different-grades; R-grade, SR-grade, and SSR-grade. Each version of Inuyasha has a different set of active and passive skills. We recommend focusing on high-grade (SSR) characters as they can help you win matches against powerful enemies. So, try getting SSR characters early on; with reroll (reroll guide – Complete tutorial. Use codes. Spend currency to wish/summon characters. If you get the top-tier SSR character, continue playing. If not, choose different servers or switch accounts to start from scratch.). Check out these Inuyasha Awakening codes to get free stuff. Now, let’s check out the Inuyasha Awakening tier list – note – this tier list is not official and completed based on our opinion.

So these are the best SSR and UR characters in the Inuyasha Awakening game.

These are pretty good characters and can help you a lot when you use them in the right team formation.