In this Ahoy Island post, we will cover the coupon codes, game guide, characters aka heroes, tier list, gear guide, team building, and other aspects such as tips on progression, getting stronger, and much more. So let’s not waste any time and get to the main content: –

As of February 2021, no new coupon code has been released so far for the Ahoy Island game. Since the game is new and in soft launch, devs may release a new coupon code soon. We will update this page if a new coupon code comes up. If you have a unqiue coupon code, you can redeem it by going to the game settings -> coupon button at the bottom of the setting page -> enter the coupon code and get rewards. Got a code? Share it in the comments.

(1) Introduction to game modes: Ahoy Island features PvE mode as well as PvP mode. You will start from the PvE campaign mode and as you clear its stages, new content or game modes will be accessible. In the campaign mode or PvP arena mode, you will have to build a team of heroes to beat the enemies. The campaign stages start getting difficult as you make progress. And, as you win battles in PvP, your rank will improve and the game will give you better rewards. You will need to continue to improve your team if you want to beat the powerful bosses in PvE and players in the PvP arena. Other PvE game modes include the tower mode, dungeon mode, exploration, and guild.

(1) Grades: In Ahoy Island, heroes are ranked in five grades; S+ grade, S grade, A grade, B grade, and C grade. The higher the grade, the more difficult it would be to obtain and transcend that hero. A higher grade also means better stats and performance. We don’t have any tier list yet – but it would be better to focus on high grade heroes; S+, S, and A.

TIPS: make sure to check out the passive skills of all the heroes that you have; all of them have unqiue skills such as healing, shield, recovery, stun, silence, etc. It would help you build a balanced team.

(3) Elements: In Ahoy Island game, all the heroes belong to one of these elements: Water, Fire, Dark, and Light. Each element has an advantage over another one. For instance, water element heroes inflict 10% additional DMG to the fire-element enemies/characters/units.

(1) CC/Crowd Control passive skills of heroes can help you win difficult stages: In some of the stages, especially the boss stages, you may want to block the enemy or the boss from unleashing the attacks. There are plenty of heroes in the game with CC passive skills such as silence, blind, slow, bleed, stun, etc. For instance, Wolf is an S-grade hero with stun effect as a passive skill. While building the team, make sure to add the heroes with CC and supportive skills; healing, stun, bleed/DoT, etc.

(2) If you add x3 or more of the same element heroes to the team, the attack and defense stats will be increased by 10%. For instance, x3 water element heroes. You can check the element of heroes on the top-right of their icons/portraits in the hero menu; light, water/blue, fire/red, skull/dark, etc.

(3) Check out the stats of the heroes and include the ones with high stats such as HP, ATK, Defense.

(5) Collect the potions and boosters while in the battle: keep an eye on the battle screen. You will often find the crates; tap those wooden boxes or crates and you may get health potions or other boosters to recover the health of heroes or charge up their skills. If you want to win stages with high difficulty, you should definitely grab these boosters. 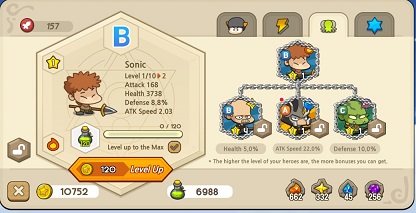 Unmerge: sacrifice the hero and obtain material items; elixir and promotion stones. Merge: merge x5 heroes of the same grade into one hero. You can get an S+ grade hero by merging the S grade heroes. S+ grade heroes have two passive skills. NOTE: Merging can also fail. 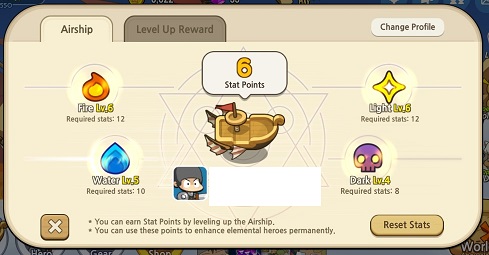 Gears in Ahoy Island game are ranked in multiple grades; Luxury Grade > S> A > B> C. These gears are; weapon, armor, helmet, and accessory. How to get gears? You can craft gears with the gear material obtained from the campaign mode stages or other PvE modes. Go to the gear menu by tapping the gear option on the main screen -> craft -> select the gear piece -> craft.

Merge: merge x5 gears of the same grade to get a new one with higher quality/rank/grade. NOTE: merging may fail.

Gear enhancement: navigate to gear -> select a gear -> tap the gear enhancement option -> select the gears that you want to sacrifice to level up or enhance the selected gear.

So this would be all in this post on Ahoy Island guide, tips, and coupon code info for beginners. Got more tips or coupon codes? Comment below.