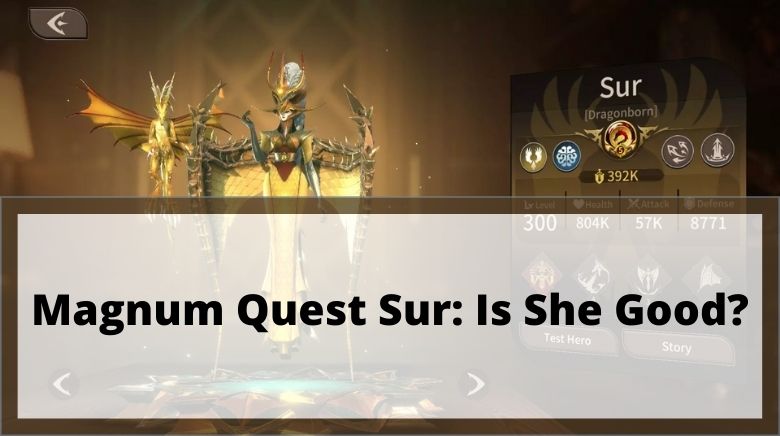 As of writing this, Sur is one of the best characters in the game, which you can acquire using the redemption code mq123. She belongs to the WIngs of Oblivion faction and excels in healing, damage, and buff roles. She does not have CC, Debuff skills. In this Sur guide, we will first go through her stats, skills, and then find out whether it’s worth investing in her or not. Make sure to check out the tier list and codes here if you are new to the game. Now, let’s not waste any time and get to the main content: –

With the help of this skill, Sur enters the awakened state, gains 50% of the attack and immunity to all control spells, at the cost of X160 points of energy per second. Once her energy is depleted, Sur switches back to her original state. When Sur is in the awakened state, Asgard’s normal attacks deal area damage, and the damage dealt increases by 20%.

LV2: When Sur is in the awakened state, the ATTACK buff increases to 70%, she also gains 10 points of HASTE

LV3: When Sur is in the awakened state, her normal attacks can strike two enemy targets simultaneously, her Energy consumption decreases to 150 points per second.

With the help of this skill, at the beginning of each battle, Asgard spits out fire at the battleground, which inflicts the [burn] effect to all enemies affected by the flames, dealing 150% ATTACK damage per second for 6 seconds, and grants the [cure] effect to all allies affected by the flames, restoring HP equal to 100% of Sur’s ATTACK per second for 6 seconds. During the battle, Asgard spits out fire at enemy targets under Sur’s command, deals 240% ATTACK damage to affected enemies, and restores HP by 120% ATTACK to affected allies

Reign of the Past

Thanks to this skill, once the battle begins, Sur gains 6% of ATTACK every 5 seconds, this buff lasts 12 seconds and can stack up 8 times. The duration resets with each stack. When Sur is in the awakened state, this skill affects all allies, they receive the same amount of additional ATTACK as Sur does

Sur gains the [tough skin] effect in the original state, which reduces incoming damage by 40%. In the awakened state, she gains the [valor] effect, which increases her damage output by 30%

So this would be all in this post on Magnum Quest Sur guide.

1 thought on “Magnum Quest Sur: Is She Good?”