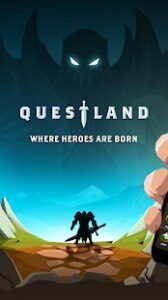 Questland is a turn-based RPG for mobile devices. It’s now available on Android. In this game, you create your own character, equip best gears, and battle against enemies in campaign mode, events, and other game modes. Check out our Questland Guide and Questland cheats, tips, and tricks

Questland is a new turn-based role-playing game for Android by Gamesture. The game features lots of game modes; campaign, events, PvP, and much more. Initial levels are very easy to clear, but later in Questland game, you face powerful epic monsters. The two basic things you have to care in this game are upgrading and looting! In this post, we have covered everything about the game; Questland Guide, Questland cheats, tips, and tricks. Let’s start the Questland guide first;

Get Started – The Basic – Questland

As usual, Questland – Turn-Based RPG starts with a tutorial in which you learn the basic; how to play Questland, about upgrades, items, parts, merging chests, fight, skills, and much more. After the tutorial, you can manually play Questland.

The Basic – The very first step you do in the game is creating a customized character. And then fight in battles. As stated above, its difficulty level increases as you progress in the game. So you have to upgrade the character, make it stronger, and defeat the enemies. The shortcut way to understand the game;

Since most of the features are locked at the beginning of the game, you have to level-up to unlock these modes such as boss challenge, arena, docks, craft, and more. As you progress, you can access more features. How to level up fast in Questland Game?

Questland tips, cheats -> To level-up fast, focus on the quests task. Completing the quests tasks rewards you a huge amount of EXP, required to reach the next level. Leveling up also increases the limit of gear upgrades.

Questland Tips, Cheats -> Equip the best gears only. Go to the gear tab and tap on a gear. Check the box next to compare option to compare its attributes with the equipped gear. Then choose the best one for your character.

There are five types of gears in Questland –

How to obtain these gears?

Equip these gears to increase the stats of your character.

Questland Tips, Cheats -> Improve these gears to improve the overall performance of the character. Improvement can be done by upgrading, boosting, activating bonuses, and reforging.

By upgrading a gear, you improve the stats of hero. You need eternium and gold for upgrading. The player also earns reforge points by upgrading the gear.

If you have multiple gears of the same type, then you can use the duplicate gear as a booster. Boosting a gear increases the stats; HP, defense, attack., and more. Go to the equipped section -> tap on the gear you want to boost, then choose the additional item and confirm. Note: the gear used in boosting will be destroyed.

Reforging:- another way to upgrade the gears. You need reforge powder and gold or gems for reforging.

Gear parts can be obtained as a reward by completing the levels, quests tasks, or through other events. You can merge these parts into a whole piece of gear once you have all the parts. Go to the hero tab -> parts -> tap on the merge option next to the gear to combine the parts into a gear piece.

Number of parts required to merge;

Orb is one of the main items in the Questland game. You can obtain orbs at;

There are three types of orbs; to increase the health stats, attack stats, and defense stats of the hero. Orbs quality;

To increase the stats of orbs, you can use rival orbs and essences. Essences are of three types; health, attack, and defense. You use essences to enhance the orbs.

So, these are some basic Questland tips, tricks for the beginners. Download the game – Here(Google Play Store). Also, see – Best adventure games for Android