Read on for the Idle Research guide: tips, cheats & strategies for beginners. 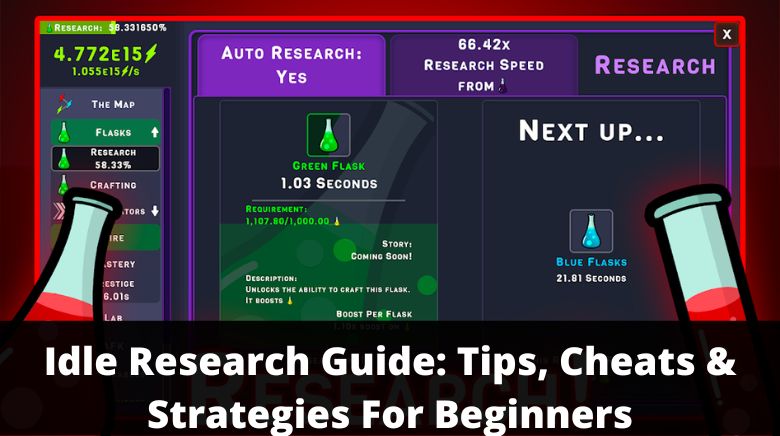 Idle Research is an incremental game for Android, iOS/Mac, and PC users. If you are on Android, you can get it from Google Play Store. iOS/Mac users can get the game from App Store. And PC players can get the game from Steam. Your objective in the game is to unlock all the flasks, max out the upgrades, unlock all the features such as tubes, map, and assembly, and complete all the achievements.

This post covers the Idle Research guide covering all the basic concepts of the game and also shares some tips, cheats, and strategies for beginners. So let’s not waste any time and get to the main content.

The same pattern goes with subsequent flasks you unlock through research; the green flask will boost the yellow flask; if the yellow flask gets the boost, it will make the orange flasks stronger and ultimately increase the red flasks’ energy production.

In the crafting tab, you can craft the flasks you have unlocked. Spend the energy to buy the crafter slot. Once bought, select a crafting slot and choose the flask you want to craft. It will be set on crafting. Set a particular flask on multiple crafter slots to boost its production.

It will cost energy to craft the red flasks. But to craft other flasks, such as orange, yellow, green, blue, and so on, will cost you the former flask. Crafting each subsequent flask requires the former flask in an adequate amount.

To progress faster in Idle Research, you must spend the energy on accelerators. These boosters can increase crafting speed, research speed, crafting count, and energy production and grant many valuable effects. On the left side of the screen, tap accelerator -> normal -> in the early game; you can spend the energy here. Once you have enough golden flasks and fire flasks, new accelerators will be accessible.

Each subsequent flask in the flask layer takes more time to craft. By spending the energy on boosting the crafting speed, you can craft the flasks faster and ultimately reach the threshold requirement for the research very quickly.

This function gets unlocked when you do the prestige a certain number of times, X3 times in our case. Also, you will see a new “Mastery” tab on the left side. Tap it to head to the mastery screen.

On the mastery screen, you will see the flasks you can master and improve their tier rank. Select a flask and set it to the mastering value “true.” And make sure that you are crafting that flask. Otherwise, you will not gain any EXP. For instance, if you want to increase the tier rank of an orange flask, it must be crafting on the crafting screen at the same time.

To increase the tier rank quickly, you can use the change all function to set all the crafting slots to craft a particular flask – based on the flask you want to master(increase tier rank). In this example, it will be the orange flask.

You will see it gaining EXP as you craft the orange flask + set it to the true value in the mastering tab. Each time the tier of a flask increases, you get X1 mystical flask. More mystical flasks = increased research speed.

If you feel stuck or slow in progress, you should consider prestige and getting those golden flasks that increase the crafting speed. Also, consider acquiring as many mystical flasks as possible through mastery to improve the research speed.

In Idle Research, you can use the fire flasks to unlock powerful upgrades. Head to the fire flask lab screen by tapping the fire option on the left. Here you can buy the upgrades when you have enough fire flasks. On the right side of the upgrade panel, you will see the burning progress; burning uses the green fuel flasks acquired through research to generate fire. The more fuel flasks you have, the more fire you generate. Spend the generated fire on making upgrades.

The diamond flask is the premium currency that you can obtain by watching video ads, playing mini-games, or spending real money. You can spend the diamond flask in the diamond upgrade tab to increase crafting speed and research speed or acquire more mastery XP and golden flasks.

When you acquire a certain number of golden flasks through prestige, a new tab in the prestige will get unlocked; the tubes. Here you will be generating the blue energy and unlocking the tubes like orange, yellow, green, blue, and so on.

So this would be all in this post on Idle Research guide, tips, cheats & strategies for beginners.