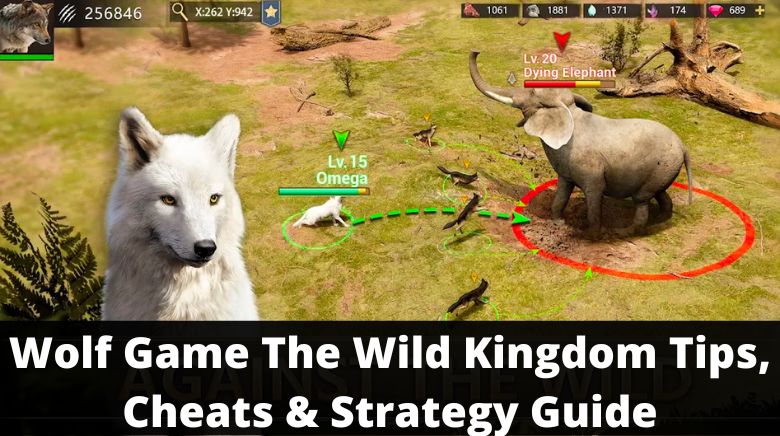 Wolf Game The Wild Kingdom, is an MMORTS mobile game published by Special Gamez. Each player will have a den to build and strengthen up in the game. It has PvE, PvP, team battles, and alliance game modes. At the beginning of the game, your home or base or den is protected by a novice shield. 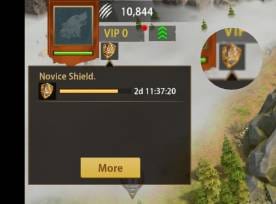 Thanks to this novice shield, no other players will be able to attack your den/home/base. But once the shield dispels, your den, home, or base will be vulnerable, and other players might invade it. It would help if you built up a good DEF to defeat the other players plundering the den; the invader can loot resources like meat, water, food, etc.

In this Wolf Game The Wild Kingdom tips, cheats & strategy guide, we will cover the basics, guide to troops, heroes, PvE mode, PVP mode, and much more.

So let’s not waste any time and get to the main content.

The first tip here is to keep an eye on the gift codes and redeem them if available. You can find the Wolf Game codes here. These gift codes grant free VIP Points, EXP items, upgrading materials, speed-ups, fangs to summon heroes, and much more.

Your den or base is the home where you will produce resources such as meat/water/crystal, train troops, and upgrade heroes. Wolf Throne is the main building on the base, and its level affects the max level cap of other buildings, pack capacity, and pack dispatch queue.

Monkeys are the characters who will be responsible for building and upgrading. In the beginning, you will have only one monkey, so you can build or upgrade only one building at a time. You can hire the second monkey for free; he will be available for two days.

Facilities such as hunting grounds and spring produce meat and water resources. Players need these resources to upgrade or build the facilities. Storage Cave is the facility that stores the resources and also protects them from being plundered by the enemy. Upgrade the storage cave to protect more resources.

Healing Herb is the facility that heals wounded troops. Post battle, if there are injured troops, they can recuperate here. It will cost the resources such as meat and water.

Valley Gate is the wall that blocks the enemy from coming in. On your home or den/base, tap Valley Gate and then tap the Valley Gate/cave icon. Here you can appoint the heroes to garrison the Valley Gate. When an intruder strikes the base, the heroes assigned to this gate will use their abilities to defend it. If the enemy is powerful and manages to break in, the Valley Gate will burn, and its durability will dwindle over time. The game will teleport your den, home, or base if it’s persistently getting raided by enemies and the Valley Gate’s durability hits 0.

The gem is an in-game currency in Wolf Game The Wild Kingdom and must be spent carefully, especially as a F2P player. We recommend investing gems into the first few VIP levels for permanent perks. In the top-left corner, tap the VIP option; this will open the VIP screen where you can see the current VIP level, daily gift reward, VIP exclusive buffs, etc. On the left, tap on the (+) icon -> invest the gems in upgrading the VIP level. At each subsequent VIP level, you get buffs like AP(Action Points) regeneration, RSS Production boost, etc.

You will need thousands of gems at later VIP levels, so you can just skip those if you are f2p. Since you will not be spending gems at a higher VIP level, save them for premium items that you will need in the late game. 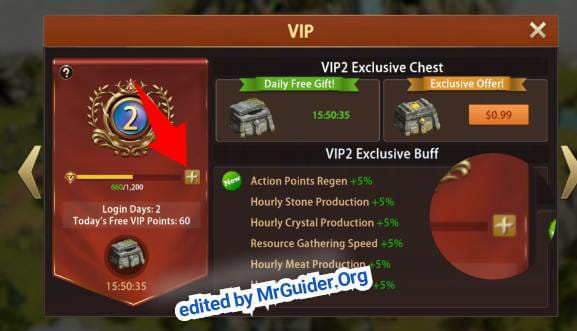 Wolf Den is the facility at your base where you can train troops like wolves, coyotes, and more. Upgrade the wolf den to increase training capacity; train more troops at a time with resources. By researching in the building tree of knowledge, you can unlock the high tier of these troops. For instance, Eastern Wolf is tier II, Eurasian Wolf is tier III, Plains Wolf is tier IV, and Florida Wolf is tier V.

Valhalla is the facility at your den/home/base where you recruit heroes. You can assign heroes on Valley Gate to defend the den/base/home. Or you can send them to invade an enemy on the world map. You get four free summons daily; it’s not guaranteed that you will get the heroes; you may get resources instead.

To summon more than four times, you will need fangs. You can acquire fangs by doing the chapter quests, defeating enemies, and completing missions through events or gift codes. You can find the Wolf Game codes here.

In the lower-right corner, tap the hero option to enter the hero screen. Select any hero on the left, and its profile will appear. In the top-right corner, you will see the hero’s strength against coyotes, wolves, or jackals. S tier means the hero is best at fighting against that particular enemy. A tier means good, B tier means decent, C tier means average, and D tier means weak.

Below that, you will have a level bar; tap the + icon, feed EXP items to the hero, and level it up. Leveling raises heroes’ attributes. Tap the ⇑ icon to upgrade or evolve the hero. You will need hero shards of the hero you are trying to evolve to perform this upgrade. For instance, Alpha is one of the heroes in Wolf Game The Wild Kingdom, and to evolve it, you will need Alpha Hero Shards.

Hero shards can be obtained from Valhalla. Spend Fangs, and you may get the hero shards based on the drop rate.

Wolf Game The Wild Kingdom Tips: Part V – How To Use Heroes

You should get familiar with heroes’ skills and use them based on their strengths. For instance, some heroes are best at gathering resources from the map. Some heroes are best at increasing the pack’s DMG and DEF. For instance, Frank is one of the heroes in the Wolf Game, and its second skill increases the gathering speed. So if you appoint this hero (post level 20) to lead the pack for gathering water, meat, or stone, it will be faster than the hero who increases DMG or DEF.

For PvE and PvP battles, appoint the heroes with skills that raise the pack’s DMG, DEF, and Rally Capacity.

Level up and evolve/upgrade the hero to get better at gathering or battling enemies.

In the early game, progress through the chapter quests; these quests grant resources, hero shards, speed-ups, and more. In the lower-left corner, tap the wolf icon -> check the quest -> go -> complete the quest -> claim the reward.

Before upgrading the wolf’s throne, make sure to upgrade the buildings to its level to keep things organized.

Research techs in the tree of knowledge to unlock buffs, new troops, and functions.

Join an active alliance to get freebies and assistance in the battle.

Get familiar with heroes’ skills and use them based on their strengths.

Send heroes to gather resources on the world map.

Upgrade the heroes; level them up, and use the hero shards to evolve or upgrade them.

Head to the world map and fight animals to earn rewards such as EXP items, gems, speed-up, resources, fangs, etc. Use the search icon in the lower-right on the world map to search for the target; wandering animals can be defeated alone, but elephant-like animals require rally, so join an alliance and get assistance from the alliance.

Redeem the codes. You can find the Wolf Game codes here.