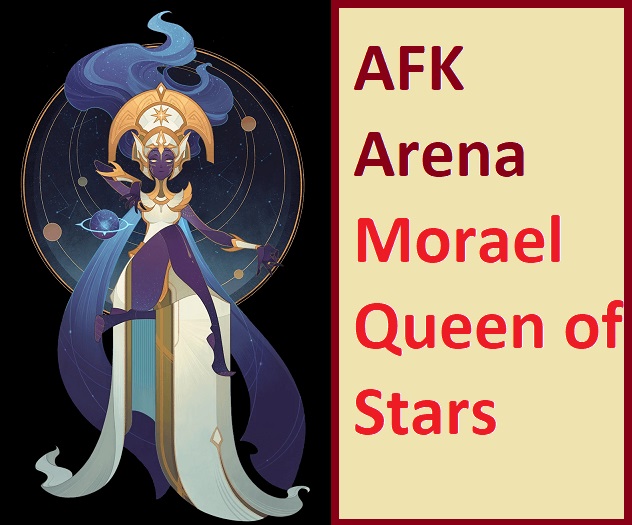 While the cosmic field is on the combat field and doing its job, the Morael Queen of Stars will unleash X120 % AoE DMG on the enemies trapped in the cosmic field. And, if a non-friendly unit manages to escape this cosmic field, things will get worse for it as Morael will cause 320 % DMG and also immobilize that unit by applying stun effect on it.

Effect of this ability: Morael Queen of Stars commands the initial formed Star Core and moves it to the most densely concentrated area of non-friendly units, which deals 60% DMG to any non-friendly units that are in their way.

Effect of this ability: During the battle, the initially formed Star Core accumulates cosmic energy as the battle progresses, from the galaxy. Once the initially formed Star Core has finished accumulating the energy, it respectively transfers X120 Energy points to Morael and all near friendly units, which consequently exhausts all of the Star Core’s energy. The Star Core can accumulate 10% of its total energy capacity per second.

Effect of this ability: Morael Queen of Stars charges her Star Core with the cosmic power, which then explodes, causing 240% DMG to nearby enemies.

Exclusive Signature Item & Its Skill Of Morael Queen of Stars⇓

Morael Queen of Stars’ exclusive item is called “Heart of Zohra”. And its skill is named Astral Fortune. Effect: During the ongoing battle, each time a non-friendly unit/hero who is close to the Star Core loses 1% health points, the Star Core accumulates + 0.4% of its total energy limit cap.

+10 Unlocks this effect; When the initially formed Star Core is transferring Energy to Morael and her friendly units, it will also raise their ATK Ratings by 20% for X5 seconds.

+20 Unlocks this effect; When the initially formed Star Core is transferring Energy to Morael and her friendly units, it will also raise their Haste by X30 points for X5 seconds.

+30 Unlocks this effect; During the ongoing battle, each time an enemy unit near the Star Core loses X1% health, the Star Core accumulates an extra 0.6% of its total energy capacity.

Furniture Set Bonuses; Activate By Placing A Set Number Of Items In The Room⇓

So this would be all in this post on AFK Arena Morael Queen of Stars.