There are over 70 Heroes in AFK Arena. Read on and check out this AFK Arena Tier list where we have revealed the best heroes in the game for early/late game. The campaign mode gets worse as you progress through it and if you have not powered up the heroes for those high-difficult rank stages, you would not be able to pass it.

AFK arena features lots of heroes – each hero with different roles such as DPS, tank, healers, buffers, and more. You will have to spend thousands of resources such as gold, EXP, essence, etc. to raise the power of heroes. And, of course, you would not ever want to waste these resources on the useless heroes. In today’s post, we will help you to figure out the AFK Arena Best Heroes to build the best team and recommend you to focus on developing them. So without further ado, head to the AFK Arena Tier List 2020. 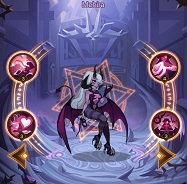 Mehira is one of the best mages in AFK Arena. She can do a lot of AoE damage and control the enemies. Her Ultimate Skill is Mesmerize that you can cast by tapping her icon during the battle – it makes the enemies cast normal attacks on each other. Other than this ultimate skill, the three passives skills that she uses automatically during the battle are Infatuation(does damage and reduce damage taken), Whiplash(AoE), and Hellspawn(summons minions and attack the enemies).

So she is pretty good at dealing damage to the enemies and controlling them with the CC skill. However, it’s hard to get her! 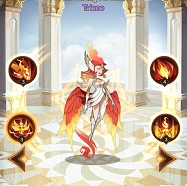 Talene is one of the support heroes in AFK Arena with the primary role of dealing the continuous damage to the enemies. Talene’s ultimate skill is fire born that you can unleash by tapping her icon during the battle when it’s charged. With this skill, Talene gets a permanent shield by sacrificing around 90% of her vitality. Also, her normal attacks turn into the close-range AoE attacks with additional damage when in Phoneix Form.

Other than Ultimate Skill, her three passive skills are Phoenix Rising(when she dies, this passive skill transforms her into a fireball and recovers health every second. When the health reaches +50%, she reborn and explode that cause AoE DMG). Another passive skill is Meteor Shower that drops meteors on the enemies and causes damage. And, at last, the Afterglow skill that recovers the health of allies. 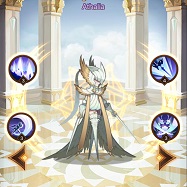 Athalia is one of the best heroes in the AFK Arena game. The best way to get her is by spending challenge tokens in the shop. Once you clear the campaign stage 9-20, you can participate in Legends’ Challenger Tournament and earn these tokens.

Spend these tokens in the challenge shop and get Athalia. Speaking of her strength, she excels in inflicting massive to the enemies. Her Ultimate Skill does AoE damage and has a 100% chance to perform a critical strike. This skill is the deadliest skill you will ever see from a hero in AFK Arena. It makes Athalia super fast and slashes all the enemies in her path x3 times. Each slash of her cause massive damage to all the enemies in her path with a 100% CRIT Strike in the third slash. 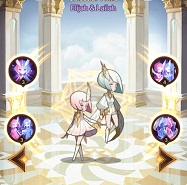 Another one of the best support-type AFK Arena Heroes. These are two characters – both fight independently during the battle. Their ultimate skill, which is Hope, increases the haste(attack speed) of the heroes. And, level 2 of this ability dispels the debuffs from all the allies. Other than ultimate skill, they have three more passive skills; Cleanse – this skill activates when Lailah is affected by the CC ability of an enemy or when Elijah is near the enemy. If Lailah is affected by the CC ability of the enemy, then Elijah dispels it. And, if Elijah is near an enemy, Lailah teleports there and strike with the knockback effect.

Another skill is Grace, which restores the ally’s vitality – prioritize the allies fighting from the front. And, at last, The Unity skill, which makes them soak the damage. 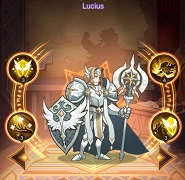 Lucius is one of the best tank heroes in AFK Arena. Her ultimate skill Heaven’s Protection protects all the allies with a divine shield that reduces the damage. Other than this ultimate ability, he can also heal the allies with Divine Blessing skill, which is a passive skill and activates automatically during the battle. The other two skills are Divine Strike – it’s an AoE attack skill, and Blessed Shield – this skill creates a shield that protects him from the enemy’s attack/damage.

His abilities justify the class and role; tank + regeneration. You should consider him the main tank if you have this character! 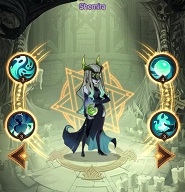 Shemira is another great damage dealer in the game; probably the best one. By unleashing her tortured skills, she can knock down all the enemies in no time. It’s one of her best skills that hits all the enemies and causes massive damage – knocking them down on their knees. Her silence skill banishes the mage’s skills for a few seconds. 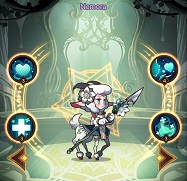 Nemora is one of the best healers heroes in the AFK Arena game. She can heal all the allies in the combat with her ultimate skill; Wild Wonder. She also has the Beguile ability, using which she can turn out the enemy’s attack on themselves. Keep in mind that she is not good at dealing damage – if you are looking for a healer, then Nemora would be the best option. 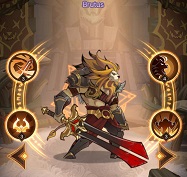 Another one of the best tank heroes in AFK Arena. His DEF and HP stats are pretty good, which ultimately impact his survivability during the battle. His ultimate skill cause damage to the enemy. His damage increases as his health fall. With the Roar ability, which is a passive effect, enemies receive more damage.

Mezoth is one of the best tank characters in AFK Arena – quite good in PvP, PvE. His devour skill imprison the enemy in the stomach and cause HP to lose. The survivability of this hero is pretty good – thanks to the shield and passive skill that increases Max HP cap. You can read more about Mezoth here.

So these are the top-tier AFK Arena Best Heroes – S+ Rank. The list does not end here – check out the S-Tier, and then A-Tier Heroes.

Khazard was added to the 1.30.05 patch. He excels in applying the CC and debuff effects. For example – with Frozen Mist skill, he deals damage to all the enemies – also, unleashes a frozen mist that causes damage to the enemies over time.

With Frozen Beam skill, he can freeze the enemy for a few seconds. Overall, he is a good hero – deserve to be in the S-Tier. For PvP, he deserves to be in the S+ Tier.

A new melee damage dealer hero from AFK Arena developers. He unleashes the Ice tornado on the battlefield which deals AoE damage to the enemies. Also, his skills can freeze the enemies, make them slow. You can test him if you want and see the skills’ effect.

Rowan is a mischievous guy who supports the allies with his awesome supportive skills. The Dazzle Skill – when you unleash this skill, he throws gold coins on the battlefield and targets both; allies and enemies.

Safiya is known for her beast form and the AoE damage skills. She can unleash AoE damage, powerful skills that stun the enemies, increase the attack ratings of allies. Better to test her skills’ effect in the game for more details.

He summons the evil spirits to haunt and stun the enemies. Haunting, Stunning, and dealing damage to the enemies are his strengths.

Another scary character in AFK Arena. Better to use her without auto-battle because her ability (Butchery) would not work if auto-battle is turned on. She is known for invincibility effects and dealing a huge amount of damage to the enemies.

Tasi is another healer with crowd controlling skills as a bonus. She can banish the enemies for a few seconds, she can put all the enemies to sleep as well. Her dream spirit skill summons a magical fairy who heals the allies and attack the enemies.

Because of the best agility stats, she is capable of dodging enemy attacks, which makes her survivability rate quite good. Also, at the beginning of the battle, Lyca blesses the allies with an attack speed boost. Additionally, her DPS skill, the arrow of justice, can knock back the targets.

Orthros is the latest hero released in the AFK Arena game. Orthros possesses amazing skills that protect the allies in the battle. Time Suspension – With this skill, Orthros freezes the enemies as well as stops the time – and, then attacks the weakest enemy on the battlefield – dealing 60% damage per attack on the enemy. The amount of damage increases as the skill level goes up.

Time Trap – It’s an amazing skill – when the battle starts, Orthros puts a time-trap on two closest enemies. You can see the timer above their heads. Within a few seconds, the timer gets explode – dealing AoE damage to nearby enemies.

Belinda is one of the best Mage heroes in AFK Arena. With the help of divine power, she unleashes AoE damage to the enemies and makes them miserable. She also posses a self-buff skill which increases CRIT Rating.

She supports the allies in the combat by healing, restoring their energy. Also, she inflicts damage to the enemies.

Fawkes is a late-game unit with a variety of good skills. One of his best skills is the purification, which removes the buffs from the enemies. He also has an ability similar to Tasi’s skill banishment – confines, using it he can lock an enemy. He is also capable of reducing the enemy’s speed for a few seconds.

So these are AFK Arena Best Heroes – Under S Tier.

Hogan Vs Thoran Vs Grehzul

In the early game, Hogan can help you a lot, but in the late game, Thoran or Grehzul would be useful. Hogan has some good CC skills such as stun, knockback, and more. His defensive stats are also pretty good. It’s a quite good unit for the early game. Thoran – Thoran has a resurrect skill, which gives him one more life during the battle. While Grehzul has some great true tank-type skills such as shield, reduction of magic damage, stealing enemy defense, etc. We would recommend investing in Grehzul if you have both Thoran and Grehzul.

So these are the top tier best AFK Arena heroes. (S+>S>A).

Let’s learn about the heroes’ roles first if you don’t want to get confused by reading those short forms in the above AFK Arena tier list: –

Now, let’s navigate to the AFK Arena Tier List and check out the best heroes in the game.

So this would be all in this post on AFK Arena Best Heroes and AFK Arena Tier List. This article was last updated in April 2020.