This guide covers “how to play the Destiny Child Defense War”, about the “Childs”, “Archfiend Candidates”, “best battle decks/teams”, “tier list”, and other aspects such as tips on progression, getting started, upgrades, and much more. So let’s not waste any time and get straight to the main content: Destiny Child Defense War tier list, best battle decks, guide, tips, and strategies: –

(2) In the arena battle mode(the one that you play right after the tutorial), you will compete with another player. While in the battle, both players are raided by the minions. If you are familiar with the TD games, then you should not have any problem understanding the battle mechanics. If not, then here’s some info – what you need to do is protect the “Archfiend Candidate” from being attacked by minions.

⇒A battle has multiple rounds – at the end of each round, both players are challenged to defeat the boss. Bosses have unique skills in this game; they can transform/freeze your characters/Childs. And, if they manage to strike Archfiend Candidate, you will lose x2 lives. In the next round, you will face more powerful minions. And at the end of the 2nd round, a more powerful boss. Your victory depends on how fast your opponent fails to protect Archfiend Candidate. What you need to do is build up the defense and keep getting stronger after each wave.

There is x1 permanent way to make the Childs stronger and x2 temporary ways to make the Childs Stronger in the Destiny Child Defense Way. The first permanent way is by leveling up the Childs – you will need its duplicate cards and a certain number of gold coins. To level up a Child character, navigate to the Child menu in the game and tap on an unlocked Child. The x2 temporary ways to make Childs stronger are by powering up and ranking them up.

When you “fuse” the x2 units at the same star level, you will get a random “Child” unit(one of the units in the battle deck).

In this part, we have listed powerful best Destiny Child Defense War battle decks(based on arena trophies level below 2000): –

In this part, we have listed decks consisting of Childs/Units that do not belong to “legendary” rarity: –

So far these are some recommended best decks for Destiny Child Defense War(trophies below 2000). If you have other deck ideas, please share them in the comment box below.

Since the game has just been released, we do not have a “full” Destiny Child Defense War tier list – but this might help if you are confused about which units are the best: –

Please do note that this is not an official tier list – it’s based on our opinion. You are free to use other units as well. Share your favorite/best units in the comment box below.

(1) Power-up or merge? As we mentioned in the guide above, the two ways to make your units stronger during the battle are powering them up with mana or making fusion. Let’s break it down: –

(3) Cons: the cost of powering up a unit increases every time you power it up. Cons: fusion may give you a different unit. 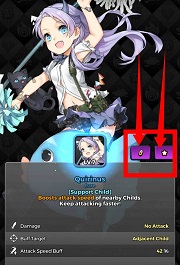 (1) You can check the next level or next star level stats of a unit by going to its profile menu. 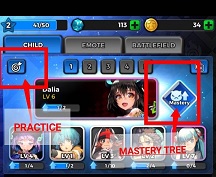 (2) Players can play the “practice” mode by tapping the “dart” icon in the top-left corner of the deck menu.

(3) Use the Archfiend Candidate skill at the right time.

(4) Make sure that your deck has enough ATK type Childs. Do not go with more than x2 support/buffers/debuffers. Include at least x1 supporter/buffer/debuffer. Buffer or supporter Childs like Quirinus that boost ATK Speed. Debuffers like Mayahuel or Lisa slow down the minions.

(5) Join a clan and you can get access to great functions; the friendly matches and card request(allows you to request cards from other members).

(6) Check out the shop daily – the daily specials tab features unit cards that you can buy with coins. Leveling up the units give EXP that increases the account level.

(7) The quality of Devil bags in the shops increases as your arena rank goes up.

(8) When you level up in the Destiny Child Defense War, you get x1 mastery point. Navigate to the “Child” tab of the game and there you will find a mastery button on the top-right side -> tap it -> spend the master points to build up the passive bonuses effect.

(9) Try the co-op mode – two players team up together and clear the waves. The more waves you clear, the more rewards you get.

To entter the “Destiny Child Defense War Coupon Code”, tap the blue color menu button on the top-right side -> settings -> “redeem coupon code” -> enter the code and get rewards. As of now, no coupon code is available. If you know any coupon code that’s available for this game comment below.