Read on for the Disney Mirrorverse Evil Queen guide covering her stats, abilities, and talents and find out whether she is good or not. 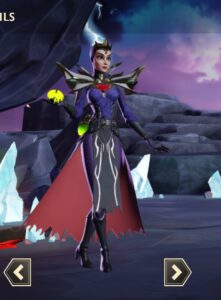 Evil Queen is one of the characters featured in the Disney Mirrorverse game. She is a support role guardian/character with Book Smart and Royalty traits. She is capable of inflicting poison DMG on the enemies and also possesses the ability to heal all the allies. Even though she is a support role character, she can inflict a good amount of DMG on the enemies using the poison effect skill. Please refer to our Disney Mirrorverse tier list guide for her tier rankings.

How To Get Evil Queen In Disney Mirrorverse?

In Disney Mirrorverse, you can obtain Evil Queen by opening the crystals; Stellar Crystal, Famed Crystal, and Timekeeper Crystal.

Yes, she is one of the best support role characters/guardians with a good skill kit. She possesses AoE healing skill that restore the health of all allies. With her core ability and special ability, she can inflict poison effects on the enemies and cause DMG to them. Please refer to our Disney Mirrorverse tier list guide for her tier rankings if you want to know more.

The Evil Queen has a 15% chance on Basic Attacks and 1 20% chance on Heavy Attacks to inflict her target with Poison, causing 100% DMG per second, for 10 seconds. Max stacks; 10.

When the Evil Queen inflicts a target with Poison, they are also inflicted with a Heartsbane Charge increasing the strength of all poison DMG, from all sources, by 10% each. (Max stacks; 10).

Each enemy is inflicted with Poison, causing 10% damage per second, for 10 seconds. Max stacks; 10.

All allies heal 1% each second for X4 seconds. Each Heartsbane charge on the enemy team adds 0.5% to this value. Max stacks; 10.

As long as The Evil Queen is above 50% HP, her heavy attack inflicts poison, causing 10% DMG per second, for X10 seconds(max stacks; 10).

Unlocks at level 15. Grants +20% Attack at the start of an encounter.

Unlocks at level 25. While an enemy is inflicted with Poison and 5 or more Heartsbane Charges, they are inflicted with Dizzy, reducing their chance of successfully landing basic and heavy attacks by -50%.

Unlocks at level 30, If an enemy is defeated while inflicted with Poison and 8 or more Heartsbane Charges, all allies are healed for 5% instantly.

The vain, poison-hearted monarch known as the Evil Queen is not only a powerful sorceress but a potion master as well. Her obsessive jealousy means her heart is full of pure, jealous rage, and this poison seeps into not just her potions but everything she does

So that’s all we got in this post on the Disney Mirrorverse Evil Queen guide.