Read on for the Disney Mirrorverse Hiro Hamada guide covering his stats, abilities, and talents and find out whether he is good. 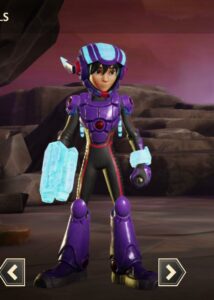 How To Get Hiro Hamada In Disney Mirrorverse?

In Disney Mirrorverse, you can obtain Hiro Hamada by opening the crystals; Stellar Crystal, Famed Crystal, and Timekeeper Crystal.

Hiro Hamada is the best/OP support role character. He can heal allies, provide them buffs, and can be your main healer/supporter in the team. Please refer to our Disney Mirrorverse tier list guide for his tier rankings.

Attribute buffs on Hiro and other allies gain an additional 10% potency while Hiro is in the encounter.

Hiro connects to a random ally at the start of the encounter. While connected, Hiro and that ally resit 25% special ability damage. Hiro can use a heavy attack at any time to manually connect to his closest ally.

Once per encounter per ally, when Hiro is connected to an ally below 50% HP, that ally heals 0.75% each second for x8 seconds.

Hiro connects to all other allies for X8 seconds, granting them the effects of his core ability.

While Hiro’s special ability is active, the strength of the effects from his core ability is doubled, and all allies heal 1.5% each second for x8 seconds.

While Hiro’s special ability is active, Hiro and other allies gain a 50% attack buff for each ally he is connected to.

Each time one of Hiro’s allies is defeated, Hiro gains a 25% attack buff that lasts until the end of the encounter. Max stacks; x2.

If Hiro has no allies, his heavy attack inflicts his target with Knock Back – 5 seconds cooldown.

Unlocks at level 12. Grants +20% DEFENSE at the start of an encounter.

Unlocks at level 15. Grants +20% HEALTH at the start of an encounter.

When Hiro triggers his special ability, he has a 100% chance to cleanse X1 attribute debuff from each ally. Hi-tech allies become immune to purge while connected to Hiro. Unlocks at level 25.

A tech-savvy inventive genius as well a loyal friend, Hiro Hamada is able to alter the very world using tech and code. With his thoughts alone he can materialize objects through a neural link matter transmitter, a testament to the power of his amplified adaptive mind.

So that’s all we got in this post on the Disney Mirrorverse Hiro Hamada guide.