Read on for the Disney Mirrorverse Mike Wazowski guide covering his stats, abilities, and talents and find out whether he is good. 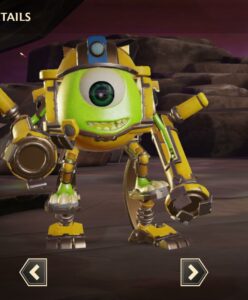 How To Get Mike Wazowski In Disney Mirrorverse?

In Disney Mirrorverse, you can obtain Mike Wazowski by opening the crystals; Stellar Crystal, Famed Crystal, and Timekeeper Crystal.

Mike Wazowski is an average support role character. He is capable of healing allies, boost their DEF/Armor, and can dispel attribute debuff on allies. Please refer to our Disney Mirrorverse tier list guide for his tier rankings.

After a heavy attack, the ally with the lowest HP percentage heals 6%, and all allies with less than 20% health heal 6%. This ability has a 5 second CD.

Defense buffs from all allies are 10% stronger.

Any time an ally gains armor while they already have armor, they gain a 10% attack buff for x5 seconds.

Grants 8% to all attributes for all allies while Mike is in the encounter.

When Mike or one of his allies drops below 20% health for the first time in an encounter, that ally immediately heals 25%.

Keep an eye out

I need a favor

Unlocks at level 20. Heals from all allies are 20% stronger.

Armor gained by all allies is 20% stronger. Unlocks at level 25.

You got this buddy!

For a little guy, Mike Wazowksi has a big personality — and a big mech battlesuit! A loyal friend and expert coach, Nike’s trainer abilities have been magnified to such as a degree that he is borderline precognitive, able to anticipate his allies’ neds before they are even aware they have them.

So that’s all we got in this post on the Disney Mirrorverse Mike Wazowski guide.