Read on for the Disney Mirrorverse Jack Sparrow guide covering his stats, abilities, and talents and find out whether he is good. 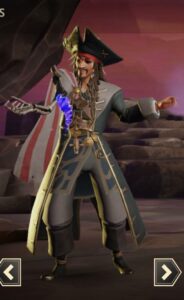 How To Get Jack Sparrow In Disney Mirrorverse?

In Disney Mirrorverse, you can obtain Jack Sparrow by opening the crystals; Stellar Crystal, Famed Crystal, and Timekeeper Crystal.

Jack Sparrow is a decent support role character. He can heal allies, dispels attribute debuffs on them, and can inflict a focus debuff on the target. Please refer to our Disney Mirrorverse tier list guide for his tier rankings.

Jack Sparrow cleanses all attribute debuffs from each ally.

Jack Sparrow then consumes all Curse Charges and Heals all allies 1% HP, plus 1% HP per Curse Charge consumed, and attribute debuff cleansed.

Each time jack scores a Critical Hit, he has a 100% chance to inflict a -10% Focus Debuff on his target for X5 seconds.

Unlocks at level 15. Grants +20% FOCUS at the start of an encounter.

Unlocks at level 20. On activation, Jack Sparrow’s Core Ability has a 70.01% chance to grant an additional Curse Charge.

When Jack Sparrow accumulates x10 Curse Charges, the next time he casts his special, there is a 100% chance each enemy is inflicted with a -50% Focus Debuff for the duration of the Encounter. Unlocks at level 25.

Jack Sparrow’s special ability now has a 70% chance to add a 10% focus buff to the party for the rest of the encounter. Unlocks at level 30.

Captain Jack Sparrow’s life rises and falls with the tides – blessed with incredible luck, yet burdened by numerous curses. But Stellar Magic has allowed him to turn these things to his advantage, channeling the power of his curses to help his allies and harm his foes. Though he is still a bit of a rogue, Jack is unswervingly faithful to his crew and supports them even when there be squalls ahead.

So that’s all we got in this post on the Disney Mirrorverse Jack Sparrow guide.