Read on for ECHOES of MANA reroll guide. Also, check out the reroll tier list; who to reroll, when to reroll. 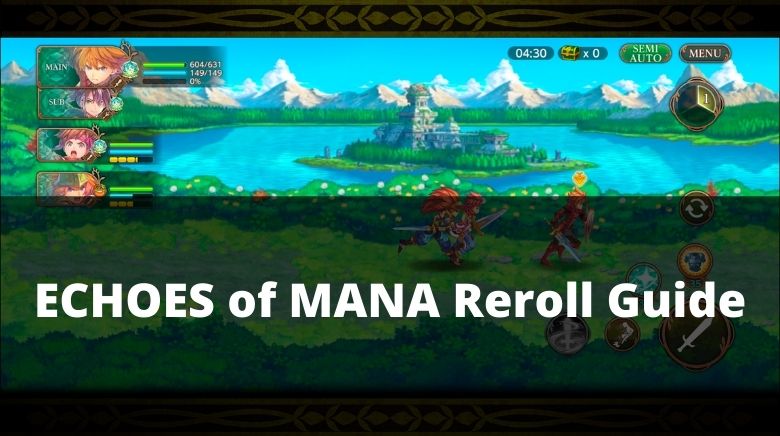 The following Echoes of Mana reroll guide is based on the English version. It covers the complete rerolling process; how to reroll, when to reroll, and who to reroll. So let’s not waste any time and get to the main content: –

First, go through the tutorial and skip the cutscenes to complete the tutorial quickly. After a few battles, the game will unlock a beginner banner(Harvest) where you can reroll an infinite number of times; but this early tutorial banner features 3-star characters only.

Scroll down below to find out what 3-star character is the best to reroll on this infinite banner. Also, see – Echoes of Mana tier list

After getting the guaranteed 3-star character, head to the game’s main screen.  On the right side, tap the present/gift box icon and collect the pre-registration rewards; the rewards include a 4-star character ticket, crystals, etc. Spend the ticket and gacha currency to summon characters(HARVEST); 4-star. If you get the top-tier character, keep playing. If not, reroll by resetting the current progress. Scroll down to know how to reroll.

It’s very easy to reroll in Echoes of Mana. On the title/start screen(when you launch the game and tap the screen to start), in the lower-right corner, tap on “user services” -> tap “delete user data” -> “confirm.” This will clear the game data and allow you to start over. Scroll down below for Echoes of Mana reroll tier list. Also, see – Echoes of Mana tier list

So this would be all in this post on the Echoes of Mana reroll guide. We will continue to provide updates on new character releases. Thanks for visiting this page!