This guide covers “how to play Forstborn Coop Survival”, about the character-building, surviving tactics, raid, tournament, and other aspects such as building a defensive camp, and much more. So, let’s not waste any time and get straight to the main content: Frostborn Coop Survival guide, tips, cheats & strategies: –

Getting Started With The Basic Raid & Tournament Mechanics

(1) First things first – Frostborn Coop Survival is a competitive game with PvP mechanics. Other players can raid your camp and loot the resources from the chests. They can break the wall of your camp house, plunder the items from the chests, and cause damage to your character. After being raided, your camp will get a free shield that lasts long for about 48 hours. When under the shield protection, other players will not be able to invade your camp.

(2) Tournament is one of the best modes in the Frostborn Coop Survival game that gives you the opportunity to attain weapons of all classes. Let’s learn how to raid and participate in the tournament. 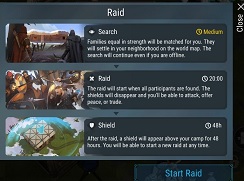 (1) First, you need to find an opponent. Families or players equal in strength are matched by the game and appear on the map. To initiate the raid process, tap on the Raid icon at the top-right side of the screen(the one with an AXE and shield). Start the search.

(2) Once the search is done, visit the map -> the game will display a message saying that someone has settled in your neighborhood. Tap the “show button”.

(3) Run to the player base once the game has found a match for you. But make sure that you are well-equipped with gears and healing stuff. You will need gears to unleash the class skills as well. Also, you may encounter another player there and he/she may initiate strikes.

(4) Enter the player camp/base. Use the gears to break the wall and start looting the chest. If the player is active there, get ready to fight.

(5) If any player eliminates, he/she can revive. The revive duration increases every elimination. Also, the eliminated player lost its bag at the place. Let’s say you get defeated by the player – you will revive on your own base, with all items lost to that place.

Raid is a competitive PvP mode. If you are new to the Frostborn Coop Survival game, then you should first focus on building your character. By building a character, we mean to empower his stats and skills through equipment uprgades and class tree upgrades.

Focus On Defense As Well In Frostborn Coop Survival

In the above raid guide, we discussed how to raid someone. In this part, you will learn how to avoid being raided or reduce the chances of getting robbed by another player.

(1) Basics: The very first tip here is to build a well-defensive fortress. If you have a well-built camp base, no one would bother to raid it. You can upgrade the walls and floors to increase the durability – making it difficult for another player to destroy it.

(2)⭐ Build a maze: let’s confuse your enemies! Keep the chests and the resources in the center room and cover that room with more walls/room structure with many entrances and exits – making it difficult for enemies to reach the room where you have kept the resources. A well-built maze will drive them crazy and leave them with nothing but disappointment. It would take a while to build the biggest maze-based camp house – but it would save your precious resources from getting plundered.

To increase the number of inventory slots in the Frostborn Coop Survival game, you need to craft the backpack. Do note that a level 1 backpack is available at the beginning that increases the number of slots by 5. But that would not help you much. So focus on getting a high-tier backpack blueprint. You will get it by developing the town district. A purple tier shoulder bag gives you x15 inventory slots. Develop the district and get this blueprint. (Although, it will take a long time).

How To Get Leather In Frostborn Coop Survival?

(1) Players can craft the leather with the help of a tanning rack using hides. You will get the tanning rack blueprint by progressing through the in-game quests. Go to blueprint/craft menu -> tanning rank -> you will need x14 pine plack, x6 iron ingotsx6 rope, and x8 scrap iron.

How To Get Weapons?

(1) You can craft weapons once you have blueprints acquired.

(2) Obtain weapons from the tournament, chests(find chests in event locations), and the shop. Equip the right weapons to use the class skills.

How To Get Rope

In the early game, you can acquire the rope by defeating monsters on the map. After eliminating them, check their corpse. If you have acquired the “tanning rack” blueprint, then build this facility and you will get to craft the ropes using plant-based fibers.

How To Get Fabric

In the early game, you can acquire the fabrics by eliminating the monsters on the map. Check their dead corpse after eliminating. Also, get from the chests.

How To Get Water

Build a rain catcher facility and put an empty flask in it. Check your inbox or underground vault for a flask of water. Empty it and then you can use it to catch water.

This guide walkthrough is in development. More info will be added later.

So that’s all we got in this post on the “Frostborn Coop Survival guide” walkthrough, tips, cheats & strategies!