Kairosoft’s latest RPG Kingdom Adventurers is a simple yet fun game for mobile. The game challenges you to grow the Kingdom by building and upgrading lots of facilities such as research centers, storage, shelter, etc. Well, this is not the only thing that you can do – monsters invade your town now and then – and, you will have to protect the town. With the help of allies or leaders, you can fight monsters, their boss, farm the resources or material items such as Sturdy Board, food, herbs, vegetables, brick, etc. So let’s not waste any time and head to the main content – Kingdom Adventurers guide and Kingdom Adventurers tips, cheats & strategies for beginners.

If you have just started playing the game, then you would have lots of questions such as how do you progress in the game, how do you get the allies or characters or leaders, material items for town upgrades, buildings, etc. We have covered all these questions in this part. So let’s get started!

The five basic in-game items are wood, copper coins/silver coins, red stones/rubies, food, and grass. These resources are required to build the facilities or in researching. At the upper-right corner of the screen, you can check the number of resources that you have in the current time and the max value(storage). Apart from all these, there are many more items that you can discover as you progress through the game.

You can farm these resources with the help of allies or leaders or characters. First, you need to deploy the character at a specific point. On the right side of the screen, tap the blue color deploy button and then select a character – and, then select a location where you want to deploy.

You can deploy the characters outside the kingdom territory. They will start gathering the resources automatically. For example – if you want to chop a tree, then deploy that character near it. Characters automatically analyze the surroundings and gather the resources – they cut the grass, dig the ground for copper coins or similar items, gather food, wood, etc.

You can also farm the resources inside the kingdom’s territory. If you have noticed, there are lots of trees, grass, bushes, like objects that can be gathered inside the Kingdom. Characters who are inside the kingdom’s territory, automatically grind these resources over time – you may get red stones or rubies, wood, grass, etc. To recall the character, tap the deploy button -> select the character who is deployed outside the territory – retreat.

After that, the character will come home. 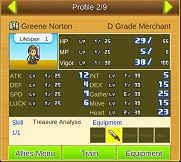 How do you recruit or get the characters in Kingdom Adventurers? If you have just started playing the game, then you need to wait until the ship or town trade center function gets unlocked. Upgrade the town to unlock new functions. Before this function, you get free characters in the tutorial – and, as you clear the fog, you may discover a new character.

Outside the Kingdom’s territory, a large part of the map is covered with fog. With the help of characters, you can clear the fog and claim the territory by defeating the boss. Read the guide below to learn how to clear the fog.

Also, if you follow the storyline, you may discover a new ally or character or leader. Near the town, there is an NPC who guides you throughout the game. Tap him to discover new things; researches, buildings, characters, etc.

Once you have unlocked the trade center or ship function, you can recruit the characters. For the first time, the game gives you free tickets so that you can get more characters. At the bottom-left corner, tap the Intro button -> there you can recruit characters with different jobs/professions; merchants, researchers, etc. from grade A-C rank. It will cost diamonds or tickets.

Once you have got the character, it’s time to hire him/her. You can have a certain number of allies in the Kingdom. And, to increase the max number, you will need to rank-up the town. Tap the recruitment(+button) option displayed on the town building -> select an ally based on his/her skills/jobs.

All the characters have unique skills. for example – researchers can research, agriculturists help you grow better crops, attackers are good at dealing with monsters. To check the details of each character, tap the list option at the upper-left corner -> residents -> select a resident/character/leader -> there you can check his lifespan, stats details, skill details, etc. In the same menu, tap the train option and then drag the items from inventory over the hero to grant him/her EXP. Go to the equipment tab and tap the Auto button at the bottom-left corner to equip gears to him/her – headgear, shield, armor, accessory, weapon, etc.

You can get the details of each building at Kindom Adventurers Wiki Page.

Monsters, Fog, And The Boss

Monsters appear in the moon night. Your characters will automatically attack the monsters. All you have to deploy them near the monster. Kill the monsters to get EXP and stock/items.

Fog – Deploy the characters close to the fog area. As they spend more time there, the fog will disappear. And, you will be able to gather more resources on the map.

Boss – As you clear the fog, you may interact with the boss. Monsters and bosses are hidden in the fog. And, to capture their territory, you must fight & defeat them. Once you have discovered a boss, you go there(boss location) and initiate the fight. 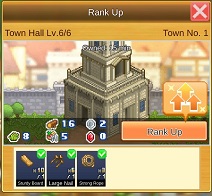 To rank-up, you must collect enough rank points. At the top-right corner of the screen, take a look at the rank points bar. Once it’s full, you will see the option to upgrade the town’s rank. And, as the town’s rank increases, you can recruit more allies – and, the game gives free diamonds.

To rank-up, you need material items such as sturdy board, high-grade brick, nail, etc. You can get these items from the treasure chests, by killing monsters, defeating the cave’s monsters or send your characters to gather resources in the territory. They may get these resources by digging the ground, mining ores, chopping trees. It takes time. So keep patience.

If you have built the material shop, you can spend the copper coins for these items. 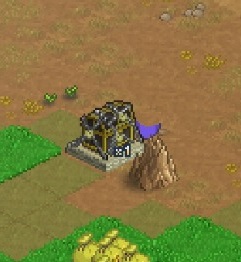 Outside the Kingdom’s territory, there would be many treasure chests. From these treasure chests, you may get valuable rewards; resources, material items, equipment. So make sure to open these chests asap – all you have to do is deploy a character over the treasure chest point. He/she will automatically hunt the chest – and, once that is done, you can claim the rewards.

Train the characters to increase their stats, let them fight monsters so that they can earn EXP and level up. Equip them gears to make them stronger.

3.) Pat Attention To The Characters’ Health

Keep an eye on the allies or leaders – as they continue their fights against the horde of monsters, their HP stats decline. And, if they lose all, they may die(Depending on the lifespan). Losing a character would be a huge lose to Kingdom – so you better take care of all the allies that you have sent outside the kingdom territory.

Tap the list option at the upper-left corner -> resident -> the list of residents will be shown -> there you can check the HP stats of the character. Retreat the character who is low on HP. If you have built their room or building, they will rest there.

And, build the temporary shelter building in the town so that allies or characters can recover their health. If not, you can use the recovery potion, which can be purchased from the diamond shop – go to the list -> items -> double-tap the recovery potion to recover HP.

Temporary Shelter – Tap the build option on the right side of the screen -> amenity tab -> temporary shelter. Double-tap a building that you want to build in the kingdom. 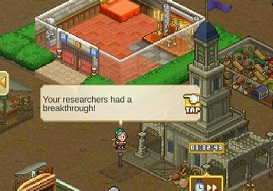 The NPC near the town building discovers new buildings and researches for you. So don’t forget to listen to him. Tap his message so that you can follow through the game flow. Loads of buildings, researches, characters info are shared by this NPC.

5.) Research To Get More Benefits

On the right side of the screen, tap the research option(if it’s not there, then you may have to continue to the NPC’s storyline or rank-up the town building). And, you need an outdoor research building lab to research. In the research menu, select the leader(researcher) and spend the resources required for research. For example – you can build the plantation building after researching plantation research in the research lab.

Depending on the resources you need to progress in the game, you have to deploy the character. For example – if you want grass, then deploy a character where the grass is available. For wood and wood type items, place them near trees. And, For copper coins or other items, let them dig the ground.

You can use diamonds to recruit more characters based on their jobs/professions, weapons, facilities, items, etc.

Earn diamonds by watching the video ad – a video ad offer appears on the left side of the screen(sometimes).

Go to the diamond shop and scroll to the bottom -> there you get free offers; share a screenshot to get diamonds, complete Tapjoy offers for diamonds.