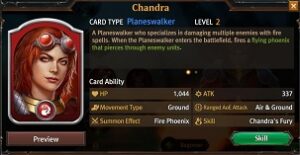 All Planeswalkers and Cards in Magic: ManaStrike belong to one of the five colors; white, blue, black, red, and green. Each color has its characteristics and highlights the main abilities of the characters.

Head to the collection menu of the game and there you can filter the cards by colors. With the help of color hints, you can easily build the best deck as it highlights the main strength of these cards.

Chandra Nalaar is one of the best Planeswalkers in Magic: ManaStrike game. She has AoE, the ability to attack ground and air units, and the basic attack is pretty good.

1.) Summon her in front of enemies to use the passive skill that fires a flying phoenix to inflict damage to the enemies in a straight line.

2.) She can attack air and ground units – the damage is pretty good.

3.) Her Planeswalker skill is Chandra’s Fury that you can cast using the skill card after summoning her to the magical battlefield. This skill does AoE damage and pushes the nearby enemies back.

He is a Vampire with melee attacks. His passive ability is reviving the nearby allies with low Hp upon their death(activates when summoned to the battlefield). He is a melee unit who attacks ground units only- so he fights in close range – the damage is OK. His ultimate/Planeswalker skill is Dark Transfusion inflicts massive damage and grants self-healing.

Will And Rowan – Blue And Red Color

They are siblings and fight together. Also, among the best Magic: ManaStrike Planeswalkers. You can swap between these characters and activate their skill. Both have unqiue skills. Will can freeze the enemy units with the basic attacks – targets both; ground and air units.

He creates an air unit when you summon him to the battlefield. This Air unit does AoE attack the enemies. He is a melee unit with AoE basic attacks – but he only targets the ground units. His Planeswaklker skill is creating a Gravity Sphere with a stun effect.

He summons Ornihopters when you bring him to the battlefield. These two Ornithopters does range attack on the ground and air units. He is a ranged-unit who targets air and ground units. His Planeswalker skill does AoE attack and the best thing is the combination of debuff ability, which reduces the enemy’s attack and movement speed.

So these are the best top-tier Planeswalkers list in Magic: ManaStrike – based on our opinion.

So this would be all in this post on Magic: ManaStrike Planeswalkers list, tier, colors guide for beginners.