This article covers “how to play Shelter War”, about dwellers, rooms, weapons, character building, and other aspects such as drones, upgrades, bitcoins, resources, and much more. So, let’s not waste any time and get straight to the Shelter War guide, tips, cheats & strategy: –

Shelter War game is all about shelter building and character development. After the apocalypse, as a survivor, you will be living in the shelter – but that’s not at all. You will have to continue to proceed further, move on, and be better. In your shelter, you can build the rooms that produce the resources, craft the weapons, train the dwellers/characters, create boosters, and there are many more.

The game has PvE as well as PvP content. But, at first, you will be able to access the PvE content where you fight the enemies and loot the abundant stuff. It could be resources, equipment, or other items!

Speaking of character development, you will need to understand the class concept first. Only after that, you will be able to build the dwellers correctly. In the shelter, the control room is one of the main rooms. You need to upgrade it to unlock new rooms and functions.

Guide To Classes In Shelter War 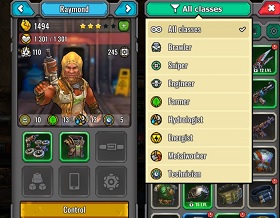 As of now, Shelter War characters or dwellers can be developed into the eight classes: –

Based on the requirement, you can build the characters. For example – if you need fighters, you can equip brawler/sniper/engineer weapons and armors to them.

Learn How To Build Dwellers Or Characters

The “equipment” plays a vital role in building dwellers or the characters’ growth. All types of equipment are available for all the classes. Tap on a dweller -> this will open its profile where you can equip and change the equipment. You can filter by equipment by classes; tap the “all classes” button and choose a specific class. For example – if you want a farmer, choose farmer class equipment and equip the best ones to the character. Here’s full info: –

Training rooms help you train the dwellers and improve their skills. For example – you can train snipers, brawlers, and engineers, or fighters in the training room. This will increase their skill and they will be able to gear up with high-tier equipment. There is a different training room available for each class. We suggest focusing on one skill per character – meaning, make characters expert in one particular aspect. It could be; farmer, technician, fighters, Energist, metalworker, etc.

Getting Equipment In Shelter War Game 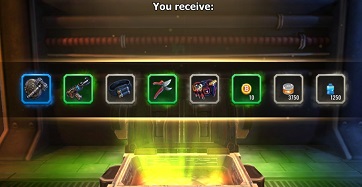 You can get equipment from the map battles or build the weapon workshop room in the shelter to start crafting them. In the bag menu, you can check all the equipment that you have. Tap on the equipment disassemble -> you can disassemble the useless gears and get the material items that you would need to craft the weapons.

You should assign dwellers properly to each room. For example – farmers to farm, hydrologist to hydrologist room, Energist to energy room, Fighters to Headquarters, and so on. This way you can boost the production of resources in the rooms.

In Shelter War, survivors can merge two identical rooms. For example; two farm rooms at the same level. All you need to do is put them next to each other. You can move rooms on the editing screen. Tap the control room and choose to edit shelter.

Save Bitcoins And Get New Fixbots

Bitcoins can be obtained from quests, missions, crates, and achievements. We would suggest you save them and get a new fixbot so that you can work in multiple rooms at a time. Tap on the control room -> tap on the + button -> it costs x500 bitcoins to get a new fixbot. You have only one in the beginner – so you can only upgrade or build one room at a time. With multiple fixbots, you can upgrade or build two rooms at a time.

Upgrade The Rooms In Shelter War

Control Room – this room determines the max level of other rooms. Before upgrading it, make sure that all other rooms are at the same level. For example – if the control room is at level 5, make sure that other rooms are also at level 5 – before upgrading to the level 6 control room. This way you can maximize the shelter work properly. Also, upgrading is important – for example – upgrade the fridge to increase food storage, water tank to increase water storage.

Get The Free Crates

Navigate to the Store menu in the Shelter War game. Then head to “valuable tab” -> there you get one daily crate for free + watch the video ad for another crate.

Tap On The Dwellers’ Reactions

Now and then, dwellers or characters in the room reach; emoji icons showed up when this happens. Tap these emotions to keep them happy and get a happiness bonus.

Keep An Eye Outside The Shelter For New Visits 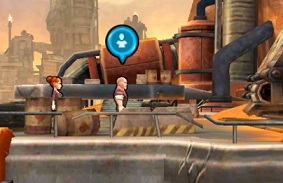 New dwellers visit your shelter from time to time. Let them in and join your horde.

Join A Clan In Shelter War

Playing solo is not fun and could be boring. Join an active clan in the Shelter War game and supporting each other; you must build a radio room first.

So that’s all we got in this post on Shelter War guide, tips, and cheats for beginners. Got more tips? Comment below!