Lupina(Ice Witch Lupina) is one of the 3-star heroes in the Guardian Tales game that summons dark fire wolves to smash the enemies – using the normal attack. As per the game, Lupina is a warrior class hero – but, she summons wolves from a range – the wolves then go close to the enemies and attack them(melee). With the chain skill that she possesses, the dark wolves claw at the foes and inflict great damage on them. Speaking of special ability, Lupina has a one – it’s called Endurance of the wolf; increases the movement speed and normal attack by 25%. The special ability would not work until you raise Lupina to grade-5(5-star).

Lupina also has an Exclusive weapon called Amarok that comes with a skill; Hell Hound – this skill makes four hounds charge forward and do melee attack to everything in the way + puts the foes in an injured state.

How To Get Lupina In Guardian Tales?

You can pull a 3-star Lupina from the summoning banner. Visit the summoning portal by tapping the summons button on the lower-right corner of the screen. Spend the gems and hope for it! The drop rate for 3-star heroes is very low. Also, you may hope for a better 3-star hero as Lupina is not the best/OP – there are other 3-star heroes that do well in all sorts of game modes.

How To Get Amarok: Lupina’s Exclusive Weapon? 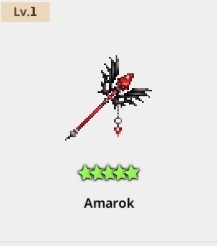 Amarok is available in the mileage shop. You can get it for x300 Mileage tickets. Please check Lupina’s evaluation below before building her or buying her EX weapon.

So that’s all we got in this post on Guardian Tales Lupina: Ice Witch Lupina!