Fastone Games, the publishers behind Hello Stars game, has just added a brand new war game called Art of War Legions to their app portfolio. On Android, the Art of War Legions game is published by 10TP Studio. It has PvE and PvP Arena game mode where you build a legion of tiny armies to strike down the enemy’s army. Also, it has an Idle system – so you earn in-game currency while not playing the game. If you have just started playing this game, then you are on the right page. This Art of War: Legions guide covers all the basic concepts of the game. Also, we have shared a bunch of Art of War: Legions tips, cheats & strategies that may help you. So without further ado, let’s dive in!

All the players in Art of War Legions start their journey from the campaign mode, which features hundreds of levels. As you complete a certain number of levels, new game modes such as Headhunt or Treasure Hunt, the PvP arena gets unlocked. Also, you discover new troops, get more slots to deploy on the battlefield, and increase the idle reward. From the PvE levels where you fight enemy territories, you earn gold coins. There are two in-game currencies in Art of War Legions – Gold coins and Diamond. And both these currencies can be earned by playing the game; as an Idle reward or battle reward. In your army, you can add troops and a hero – also, you can increase their power through upgrades. Let’s learn everything in detail and explore all the Art of War Legions game strategy, guide, tips & tricks –

Get Familiar With Troops⇓

Art of War Legions game features dozen of troops; each troop has its characteristics. You will find troops with melee attacks, ranged-abilities, mage-skills, etc. Some of the troops have high Defense, while some have high Attack Power. Also, some possess special abilities; for example – Pilgrims can heal the allies during the battle. Troops with high Defense can lead from the front because their high DEF can soak most of the damage dealt by enemies. While the troops with high attack stats usually have low Defense, so place them behind the tanky units.

For example – Iron Guards have high DEF, Archers have high attack stats. So it’s better to get familiar with each troop that you have so that you can assign them based on their strength – defensive units in the front row and followed by attackers like Archers, Bomber, or supporters like Pilgrims in the back rows.

You can learn about the units in the troop(s) menu of the game. In the footer menu, go to the Hero tab; it has two tabs; Hero and Troop. Go to the Troop tab -> tap the troop avatar/card -> this will open the troop’s profile where you can check its stats like Load, DEF, HP, Attack SPD, Characteristics. This menu gives you a comprehensive troop guide; their stats, abilities, etc. So make sure to read all the troops’ details.

The top-rank troops such as Demon Paladin, Meteor Golem, etc. are the best troops in Art of War Legions – where the bottom-rank troops such as Necromancer, Infantry, Bomber, Iron Guards are not much worthy. Note – strategically placing the troops is important – otherwise, they would be useless.

Level Up The Troops In Art of War Legions⇓

By raising the troops’ level, you can increase their combat capabilities or attributes like HP, ATK, DEF, ATK SPD, etc. All you have to do is merge the same level troop units to get an upper-level of the same unit. For example – 1-star Archer with 1-Archer = 2-star Archer. High-Star troops units have better stats. You can get the troops by spending the gold coins or gems. Tap the battle button -> in the bottom-right corner, you can use the gold coins to get a random troop.

Head to the shop -> there you can buy Normal Card Pack, Super Card Pack form normal or rare troop units. It costs you thousands of gold coins or hundreds of gems. You can easily clear the PvE stages because they are not too hard to complete – but in PvP, you will face real players with powerful armies – so make sure to level up the troops.

You can merge or level up the troops on the battle formation screen. All you need to do is drag the same unit to another same unit. 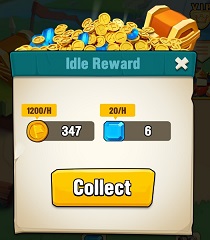 As we mentioned in the Art of War Legions game overview, there is an Idle System. The troops in the battle formation fight the enemies all time and you earn gold coins gems on an hourly basis. On the home screen of the game, tap the chest and claim the reward every hour. It gives you free gold coins and gems every hour – the amount of reward from this Idle chest depends on the PvE Levels progress. So keep clearing the levels and increase the Idle Rewards amount. 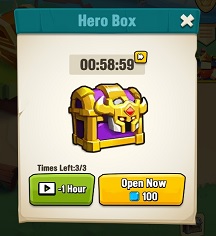 Every 5 or 10 stages in PvE, the game gives you a special reward; it could be a chest or few gems. From the hero boxes, you can get a hero. If you get the identical hero that you already have, then the game will convert it into shards that you can use to upgrade the hero. Also, the chest takes time to open – you can reduce the time by watching the video Ad. All you need to do is tap the chest box at the top of the screen when it’s locked – then watch the video Ad by tapping offer -> that’s it.

In Art of War Legions, there are lots of heroes who have active skills that you can unleash during the battle by tapping their portrait -> also, they possess passive skills. All the heroes have unique skills and you can select only one hero for the battle. If you have too many heroes unlocked, then make sure to read their skill details and select the one that suits your team. Go to the Hero tab -> tap the hero portrait -> use the navigation keys to switch between heroes -> tap the skill button to read the skill description. Upgrade the hero to raise his skill effect. Audit all the Art of War Legions heroes that you have obtained so far – read their skills and figure out the best ones. Legendary heroes are the best/top-tier heroes in the game – thanks to their legendary skill. But they are hard to get!

Building the best formation in the Art of War Legions game is not an easy task; since there are lots of troops in the game, it would be confusing who to add and who to avoid. The first thing is to choose a great hero(read the heroes’ guide above for more details on which hero is the best). The next thing is to choose the troops and place them strategically on the formation; front, mid and rare. Placing the troop units strategically is one of the important things to do while building the best formation.

We recommend adding the melee and mage units in front(melee troops are the units that attack from a close range; for example – bandits, iron guard, infantry, etc. – all these units use melee weapons). Placing mage units in the front can help you divert the enemy’s front-line troops. And, placing melee units in front help you guard the mid-row troops. In the mid-row, add the ranged-troops; the troops with long-distance attacks. For example; archers. In the rear/back row, add mages and tanks. To deal with ghost assassins, add mages in the back row.

Share your Art of War Legions best formation tips in the comments.

Get Coins By Watching Ads⇓

Go to the shop and there you will find a free treasure offer – it gives around 1500 gold coins by watching a video ad. You can claim this offer three times a day – save the coins, buy the troops – merge them, and expand the army.

Go to the Shop and scroll down to the bottom – there you will find sponsor offers – all you need to do is install the apps and claim the reward; gems. Save gems and spend on premium troops/packs.

Play All The Game Modes⇓

Other than the PvE campaign, you can play treasure hunt mode to earn gems or gold coins. From the Arena, based on the rankings, you can earn keys, chests, gold coins, and hero boxes.

In the top-right corner, tap the daily quest icon below VIP badge -> complete the quests for gold coins and gems.

In the Art of War Legions Expedition mode, you proceed by chapters. In each chapter, you will have a certain number of stages to complete. Once you complete all, you will get to play the next chapter – only if you meet the level requirements. What is level? The number of stages you cleared in the normal battle mode determines the current level. For example – if you have completed 200 stages in the normal battle mode(home screen -> above the battle button, you can check the stages), you will unlock the chapter 2. Here are the level requirements for each chapter(as of now, there are 3 chapters – new chapters will go live in next updates) –

At the moment, there are no Art of War Legions cheats available. If you want free rewards, then make sure to keep an eye on the redeem codes. You can find the codes here.

So this would be all in this Art of War Legions guide, cheats, tips & tricks for beginners. Do you have more tips, troop, or formation strategies to share? Comment below! We would recommend you joining the FB group of the game if you have more questions.